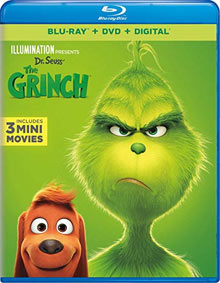 A grumpy Grinch plots to ruin Christmas for the village of Whoville. (from IMDB)

With the news that Illumination Entertainment was releasing their own version of the beloved Dr. Seuss Christmas story, How The Grinch Stole Christmas, most people couldn't help but ask... why? While it already seems too soon to revisit the Grinch's story, it's hard to imagine it's been almost 20 years since Ron Howard directed the live action adaptation that put Jim Carrey in the hairy green suit. That film hasn't aged well, either, and its mixed reception probably hasn't improved in the 18 years since its release.

After the live action adaptation of The Cat In The Hat tanked in 2003, the Seuss estate put the kibosh on all future live action Dr. Seuss films--thank goodness--which led to the CGI animated Horton Hears a Who and the environmentally heavyhanded The Lorax. Now joining the CGI animated collection is a new version of The Grinch, from the same team that brought us Despicable Me and The Secret Life of Pets. The end result is, surprisingly, almost everything we'd want from a feature-length Grinch story.

At first glance, The Grinch really isn't too different than a Despicable Me entry. Gru pretty much is a Grinch-like character, who is only softened by the love of, in his case, three little orphaned girls. For The Grinch, our titular quasi-villain is the orphan, and his life is turned upside down by the love of one little girl, Cindy Lou. While Ron Howard's Grinch had Cindy Lou take special interest in heaping love and grace on the green menace, this new outing has Cindy Lou be the daughter of a single, working mother who is in desperate need of some time off this Christmas. It ends up being Cindy Lou's selflessness that impacts the Grinch's heart so much. Other changes to the story include the involvement of a new reindeer character that the Grinch tries to enlist to help him steal Christmas. Gone is the ridiculous "Whobilation" subplot, from the Ron Howard version, and weird over-the-top antics (like the exploding mini car or the Who's contest for the best decorated home). Instead, the focus continues to be on the Who's obsession over the Christmas season, and the Grinch's abhorrence of it.

Other new characters include Mr. Bricklebaum, who actually knows the Grinch and is considered to have some of the biggest Christmas spirit of anyone in the town. We also meet Cindy Lou Who's young peers who join her on her quest to capture, and meet, Santa Claus. While each subsequent viewing of the 2000 Grinch reveals just how irritating so much of that film and its characters really are, there's an honest-to-goodness Christmasy heart to the 2018 Grinch that that version greatly lacked. The 2000 film is creative and visually entertaining, but its color palette is drab and dark. It's silly, but in a more bizarre than funny way, and its finale is really the only part of the film that gives the viewer a Christmas feeling. Illumination's take on the Seuss classic is fun, beautiful, and brimming with a Christmas feeling. I can't remember the last time I watched a new Christmas movie that made me feel the way this movie did.

The only thing I wasn't crazy about with this new film is the music. Like with Despicable Me, the film is given a more rap/hip hop kind of vibe, this time by Tyler the Creator, and they butcher the Grinch's original theme in the process. Just because it worked for Despicable Me, doesn't really mean it works for The Grinch (like having "Happy" singer Pharrell Williams assume the role of narrator this time around, which is an odd choice), and I feel it's going to damage the otherwise timeless nature of the film in the Christmas seasons to come. Still, if I'm being honest, it certainly won't keep me from wanting to revisit this film each year around the holidays.

I'd be remiss if I didn't spotlight the incredible animation in this film. While the movie is often cute and funny, it's also truly a marvel to look at. The animation for the snow alone is jaw-dropping. There's a sequence where the Grinch is approaching Fred the reindeer that looks so detailed and realistic, it's scary. And in other scenes, things as simple as the glow of his candy-cane staff is so freakishly lifelike that it helps push this film above average. Sure, spectacle isn't everything, but I can appreciate incredible animation, and Illumination have gone above and beyond to mix a realistic and cartoony feel together gorgeously.

Finally, I have to say Benedict Cumberbatch is excellent as the Grinch. The voice he uses is an odd choice (I later read it was his attempt to fit in with the American voice cast), especially since his normal voice is closer to the original Boris Karloff's than what he puts on here, but there is a certain charm to how he approaches the character in this film. This Grinch, while grumpy and mischievous, is still likable, and he never feels quite as "far gone" as the 1966 version did. I'd have to say the moment that causes him to have a change of heart in this story doesn't feel as worthy of the grand epiphany he seems to have, but it still works nonetheless, especially as part of this less volatile version of the character.

The content is what you might expect from The Grinch, although it's really quite tame -- far tamer than the 2000 film in fact. There is no course or inappropriate language, and I was surprised to hear Christmas songs used that blatantly speak of Christ's name -- like "God Rest Ye Merry Gentlemen." There is some mild, slapstick violence, and the only real possibly objectionable material would be the instances where the Grinch's behavior is rude or naughty -- like spitting out a pickle back into its jar and putting it in someone's cart, or hitting a person in the face with a snowball, or spitefully breaking the last jar of jam on a store shelf that someone wanted to purchase. The bad behavior is somewhat necessary to illustrate the Grinch's turnaround later, but any impressionable kids who might not know better may need some parental guidance for clarity before or after the film.

All in all, I wasn't expecting to like the new Grinch, let alone love it, so I was pleasantly surprised when my family and I emerged from the theater with hearts that grew a size or two bigger after viewing it. Great new Christmas movies aren't easy to come by these days, but this film is certainly worthy of checking out by anyone who loved the original, was disappointed by the first remake, or just wants a little dose of that Christmas feeling.


Dr. Seuss's The Grinch is available on Blu-Ray/DVD/Digital, DVD, 4K/Blu-Ray, and through the usual digital providers. Along with the film in high definition, the Blu-Ray disc and digital services include the following extras:

From Green to Screen (6:20) - This is the main making-of featurette that focuses on how the goal of the film was to flesh out the story from the original childrens' book. The main cast and crew talk about how Grinch suffers from childhood trauma and feeling left out, which ultimately leads to his hating and resenting Christmas. They also stress how the film's themes focus on forgiveness and loving and embracing others.

Illuminating the Grinch (4:57) is about how the Illumination animation team created this new world for the movie, using Dr. Seuss's book as a guide. Here, we mostly hear from the animation directors as well as the studio CEO, and the film's main directors.

My Earliest Grinch Memories (3:12) - Benedict Cumberbatch, Rashida Jones, the film's directors and the head of Illumination share about how they grew up with the original book and what it meant to them. Curiously enough, nowhere in any of these featurettes are the original cartoon film or the 2000 live action remake ever mentioned!

Grinchy Gadgets (3:22) is about the technological gadgets that Grinch creates in order to steal Christmas, including his sleigh, multi-purpose candy cane, and other unique gadgets.

"I am the Grinch" Lyric Video (2:50) - This is an animated lyric video for the new Despicable Me-esque hip hop theme song made for this film.

Songs from His Little Heart (3:27) - Famed composer Danny Elfman gives us a personal look at how he created the music for this film.

X-mas Around the World (2:21) highlights some odd Christmas customs and traditions in Norway, Sweden, Germany (hiding a pickle on the tree for kids to find), Venezuela, Austria (like the demonic Krampus for the "naughty" kids), Australia, and Japan (Kentucky Fried Chicken?!).

Cindy-Lous Yule log (8:03) - This is a cute little Yule Log that uses the film's movie score as we watch an animated fireplace and see Grinch and Max popping in and out of frame with quotes from the film. Honestly, I wouldn't have minded if they just made this an hour long and put Grinch and Max in sparingly so people could actually use this as a Yule Log for Christmastime.

Production Babies (1:17) - Head of Story Mark OHare introduces a list of babies that had been born during production of the film. It's cute, but really only relevant for those who worked on the film. It's a little pointless for consumers/fans of the film.

Any Who Can Draw (7:24) is a three-part instructional guide for doing quick sketches of characters from the film (with a Play All option). Mark returns to doodle the characters of The Grinch (3:05), Max (2:06) and Fred (2:13) on a clear marker board. 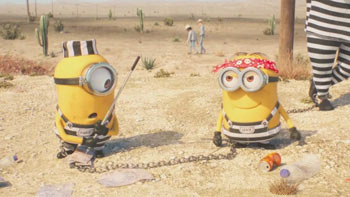 Mini-Movies
Yellow is the New Black (3:58) - The first short movie shows two minions in prison and part of a chain gang. At one point, a much larger criminal chained to them uses their leg chains to escape and they then get chased by police. It's pretty cute and worth a watch if you like the minions.

The Dog Days of Winter (4:06) - For this one, Grinch is sick in bed, and when Max goes to make him tea, he realizes they're all out. So, being the loyal pup he is, Max braves the winter snow to get tea for him in town. This is also pretty cute!

Santas Little Helpers (3:52) - Three minions try to vacation and accidentally end up in the North Pole with the elves. The head elf keeps giving them work to do but they keep messing everything up. This one is okay, but not as good as the other two (and an elf makes a bizarre reference to twerking and shakes his butt...)

The Making of the Mini-Movies (5:55) - The animation crew talk about the stories here and the technical aspects of them. It's a little interesting, but not all that insightful. It's worth skipping.

Overall, the special features are decent for 2018's The Grinch, but a little underwhelming. A featurette on the voice talent would have been cool, or a little more on the incredible effects used to make light and snow in this film, but as-is, the extras aren't bad.

Sex/Nudity: At one point, one of Cindy Lou's friends accidentally loses his clothing, and we see him standing naked with a Christmas cookie blocking his privates (there's no nudity; it's played for laughs).

Vulgarity/Language: The end credits song says "Don't give a--" and cuts off without saying a swear word.

Violence: The Grinch hits someone in the face with a snowball; Some slapstick accidents happen to Grinch, but it's nothing really violent. Disclaimer: All reviews are based solely on the opinions of the reviewer. Most reviews are rated on how the reviewer enjoyed the film overall, not exclusively on content. However, if the content really affects the reviewer's opinion and experience of the film, it will definitely affect the reviewer's overall rating.