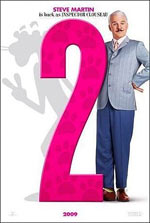 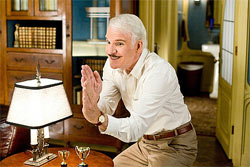 "The Pink Panther 2," the sequel to the 2006 worldwide hit, stars Steve Martin as he reprises the role of intrepid-if-bumbling French police detective, Inspector Jacques Clouseau. When legendary treasures from around the world are stolen, including the priceless Pink Panther Diamond, Chief Inspector Dreyfus (John Cleese) is forced to assign Clouseau to a team of international detectives and experts charged with catching the thief and retrieving the stolen artifacts. Martin is joined by his co-stars Jean Reno (as Ponton, his partner) and Emily Mortimer (as Nicole, the object of his awkward affections). The investigative dream team is played by Andy Garcia, Alfred Molina, Yuki Matsuzaki ("Letters From Iwo Jima") and Bollywood star Aishwarya Rai Bachchan. Lily Tomlin also stars. The story is set in Paris and Rome... (from MovieWeb.com)

Exactly three years ago, Steve Martin introduced the world to his own updated take on France's own Inspector Jacques Clouseau -- a role previously made famous by Peter Sellers in five films through the 60s and 70s. Although the film, simply titled The Pink Panther, wasn't quite the film critics and fans raved about, Martin pursued a second outing, this time with a new director, Harald Zwart, and John Cleese replacing Kevin Kline as Chief Inspector Dreyfus. Both PG-rated films are heavy on the slapstick comedy with some innuendo and sexually suggestive humor throughout. 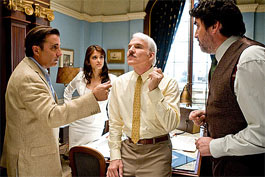 The sequel, The Pink Panther 2, does a good job capturing the look and feel of its 2006 predecessor without copying all too much or deviating too drastically from the formula. However, the premise in The Pink Panther 2 teams Clouseau up with "The Dream Team" - a group of international detective masterminds who are chasing down a thief that has stolen such priceless artifacts as The Shroud of Turin and the Magna Carta. Martin shines even brighter as Inspector Clouseau the second time around. The sexual content is played down just a little bit from the first film. It still remains mostly in verbal innuendos and such, with less of stuff like the Viagra scene or sight gags from the first. It's still unnecessarily risque and not exactly "family friendly." But Martin's Clouseau is still charming and a joy to watch -- and especially to hear him talk -- on screen. While the murder mystery plot was a bit harder to guess in the first installment, this time around, it's a little more predictable and easier to figure out, however, the acting ensemble make this one extra fun. Monty Python alumnus John Cleese fairs better as Dreyfus, although he sadly gets less screen time than Kline had. Cleese is much more likable, while Kline, although good in the role, was much more despicable in nature. And in the sequel, Alfred Molina and Andy Garcia step in as fellow detectives from other countries that prove interesting counterparts to Clouseau. They're both celebrated actors who, along with an appearance from Jeremy Irons, add some class while at the same time get a chance to play things more comically than usual. Emily Mortimer and Jean Reno return as sort of sidekicks to Martin's Clourseau, and are great additions to the cast once again.

The Pink Panther 2 isn't for anyone not watching solely for the light, fluffy entertainment. Those who disliked the first entry probably won't care for this one, however, director Harald Zwart does have a stronger outing on his hands for the sequel. It's an enjoyable mystery/comedy that is good enough to warrant a second follow-up should Martin & Co. be up for it. Still, it's unfortunate the material isn't a bit more kid friendly. While profanity consists primarily of "oh my g-d's" and a use of "*ss," there's enough innuendo to keep the comedy more adult. Again, it's thankfully a little more toned down from the 2006 flick, but parents will still want to be wise about taking the kids to The Pink Panther 2.

All in all, I found The Pink Panther 2 to be an enjoyable comedy despite its flaws. Most of the big laughs were probably at least touched on in the trailer in some form, but The Pink Panther 2 is a fun diversion for adults looking for a lighthearted comedy. While some of the innuendo is likely to go over the kids' heads (as opposed to the more inappropriately visual aforementioned sight gags in the first), parents should think twice before taking the young ones along.

Sex/Nudity: Sonia shows cleavage in her attire through most of the movie; Nicole and Clouseau embrace and almost kiss when Ponton walks in on them in his office; Vicenzo playfully slaps Nicole's butt; After Clouseau tells Mrs. Berenger that she is sexy, she tells him he cannot do so. She reprimands his tendency to use sexual harassment and describes a sexy scenario about a girl bending over and revealing cleavage and asks him to try not to react. As she describes the woman, Clouseau makes exaggeratedly excited faces (played for laughs) and when she is finished, he is slouched in his chair with a big grin on his face (not implying anything more than the fact he found the description racy); As Mrs. Berenger is reprimanding Clouseau, he looks over and sees a woman in the hallway bent down picking up a pencil she dropped (she's in a skirt, but we don't see anything revealing). After just a quick glance over, Mrs. Berenger catches him and asks if he was "ogling" her. He denies it and glances over again and he denies it before looking over quickly again; We see Vicenzo wooing Nicole (he touches her shoulders while talking to her in public, and flirts with her on an airplane). Later, he admits nothing happened between them, not even a kiss; Some completely non-sexually intended remarks are used for innuendo gags: Clouseau says "Enough of this foreplay!" while a group of people are examining a crime scene. Clouseau introduces Nicole to a group of men and tells them she is at their service for any needs they might have. And after Ponton tells Clouseau that he's having marital problems, Clouseau shouts to him across an airport, "I am sorry that you cannot satisfy your wife!"; A man remarks twice that if Clouseau solves the case, he'll wear nothing but a pink tutu. Later we see him dressed in just that (it appears he's straight, so it's done just as a sight gag)

Vulgarity/Language: 1 "a" word, 5 "oh my G-d," 2 "For G-d sakes" (and many stereotypical remarks are made as part of a gag that Clouseau has no tact)

Alcohol/Drugs: There is probably some drinking at a party/ball and in scenes at a restaurant; Clouseau goes to a wine rack to select a bottle and proceeds to cause all of them to slide out of the rack; A champagne bottle is popped at a wedding

Blood/Gore: We briefly see a bullet wound scar on a man's bare shoulder, and later again.

Violence: Mostly comedic slapstick -- Clouseau knocking things over, falling, causing fires, etc. Later, a person is shot but we see that the bullet had actually richoted off of something they were wearing but it killed an innocent bystander (a waitor). We then see that person slumped over against the wall; Two instances show a sort of French SWAT team breaking through a room's windows and roughing up the people inside (played for laughs); Chief Inspector Dreyfus bangs his head on a wall and bathroom sink (played for laughs); Ponton's children practice karate with Clouseau and they end up trashing his home. Disclaimer: All reviews are based solely on the opinions of the reviewer. Most reviews are rated on how the reviewer enjoyed the film overall, not exclusively on content. However, if the content really affects the reviewer's opinion and experience of the film, it will definitely affect the reviewer's overall rating.