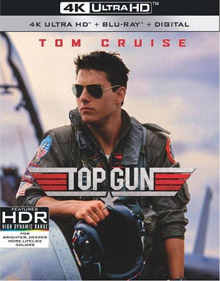 A hip, heart-pounding combination of action, music and incredible aerial photography helped make Top Gun the blockbuster hit of 1986. Top Gun takes a look at the danger and excitement that awaits every pilot at the Navy's prestigious fighter weapons school. Tom Cruise is superb as Lt. Pete "Maverick" Mitchell, a daring young flyer who's out to become the best. And Kelly McGillis sizzles as the civilian instructor who teaches Maverick a few things you can't learn in a classroom. (from iTunes) 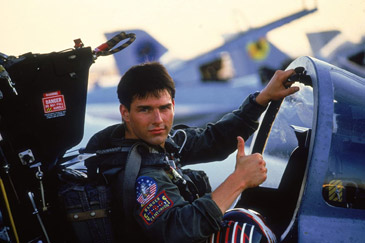 Released in 1986, Top Gun has long been viewed as the quintessential high-flying fighter pilot action film. It released under the banner of a PG-rating, ensuring that many a kid saw it (including yours truly), but it was hardly appropriate for young viewers. Still, the movie is iconic for the decade of the 1980's, and one that has impacted cinema in many ways through the years.

It's been many years since I last saw Top Gun even in part, so I was curious to check out its new 4K transfer when given the opportunity to review it. And with the long-awaited new sequel, Top Gun: Maverick slated to release this Christmas (it was pushed back because of the current pandemic), now is prime time for revisiting the film. For starters, the 4K UHD transfer is excellent. With any movie from this time period, there is still some degree of graininess to the film at any given moment, but for the most part, it's ridiculously clear and crisp. A scene where Maverick and Goose get chewed out by their superior early on in the film is especially mindblowing as every bit of detail on Stinger's desk, as well as the beads of sweat on all of their faces. I'm noticing more and more how this format really revitalizes "dated" films, and Top Gun definitely benefits from this. 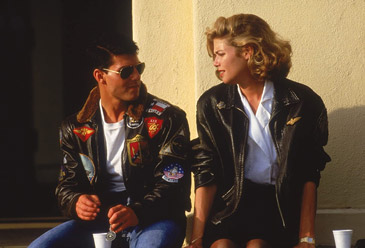 As a movie, I enjoyed seeing Top Gun again. I'd forgotten much of it, so it was interesting seeing it again as an adult. It's also neat to see how far each of the actors have come through the years. Tim Robbins, for example is practically a background character, and he obviously has had a good run (even starring opposite Tom Cruise again in 2005's War of the Worlds remake). And Meg Ryan plays Goose's husband here and clearly went on to become quite the star of the 80's and 90's herself. Cruise plays the cocky young punk quite well, and there's something bittersweet about seeing him get torn down so he can grow as a character and come out a hero by the end. And who doesn't love the brotherhood between Anthony Edwards' (TV's ER) Goose and Cruise's Maverick. It makes some of the events of the movie all that more heartbreaking, but it's their friendship that really helps make this movie better. Of course, then there's the romance between Maverick and Kelly McGillis' Charlotte (AKA "Charlie"), which may seem a hair forced, but likely adds another layer of appeal to the film for the ladies as much as the guys. 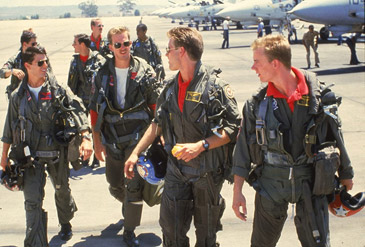 Content-wise, the film is nowhere near a PG rating. If anything, it's probably more so an edgier PG-13. Without even taking the persistent swearing into consideration, there's the sex scene between Maverick and Charlotte that's awkward for any parent to have to sit through with their kids. In it, they start making out passionately and with Berlin's iconic "Take My Breath Away" playing, he slowly removes her shirt (and it cuts just before any nudity) and then the two slowly French kiss with definite thrusting with him on top of her. While there's no graphic nudity and some will think making a stink about this is outrageous, it's still pretty intense for a PG-rated film. Along with the sex scene, there are other crude remarks throughout the movie, as well as over 30 uses of the "S" word, and a wide variety of blasphemy, include 14 of "g*dd*mn," 8 variations on Jesus' name, and several others. All of it feels so excessive and unnecessary -- this is not a film for the whole family, sadly.

Content aside, it was nice revisiting this 80's classic, I just wish it was more accessible. Chalk it up to the time in which it was made, and when Hollywood was still trying to figure out its rating system, I guess, but it's unfortunate because it really is a decent film. It places importance on friendship, being a team player, and selfessness. So, with the content in mind, I can't outright recommend the film, but I do have to say I'm eager to see Maverick in the pilot's seat once again later this year, and where Top Gun: Maverick will take the story next.


The 4K UHD combo pack of Top Gun includes the feature film in stunning 4K UHD, the standard Blu-Ray disc and a digital copy, with a series of Extras, including:

I get the feeling that not all of the extras are new (most are from the 30th anniversary in 2016), but a couple appear on the 4K disc (which is a rarity but becoming more common):

The Legacy of Top Gun (5:40) - Tom Cruise and the new sequel cast (of Top Gun: Maverick) recall the original film and what it meant to them. It doesn't have anyone from the first film besides Tom reflect on the 1986 movie, but it's still a neat retrospective. (1 "bad-a**")

On Your Six: Thirty Years of Top Gun (29:59) - In this segmented featurette, Tom tells some really great stories of flying a jet and his own adventures and experiences making Top Gun. Jerry Bruckheimer shares more about how the film came to be. This was made for the 30th anniversary of the original film when they were also just starting to plan the upcoming sequel. (1 "Oh my G-d," 3 "h*ll," 2 "G*dd*mn" from scenes, 1 "S.O.B" from a scene, 2 "H*ly Sh*t" from Tom, 1 "d*mn")

Sex/Nudity: A cadet says the classroom talk about dogfighting is giving him "a hard on." His friend jokes back "don't tease me"; After they walk into a bar, Goose tells Maverick that he lives his life between his legs. Maverick says he can "get laid in a place like this;" A fellow officer asks Goose whose butt he had to kiss to get into Top Gun. Goose says the list is long and the guy says "just like my Johnson"; Maverick and Goose bet over getting a girl, and that they have to have carnal knowledge of a woman; Charlotte asks Maverick if he wanted them to drop down on the bathroom floor right there. He jokes that the bathroom counter is sturdy enough and would do fine; Charlotte walks by Goose after having only talked with Maverick and says "Your friend was magnificent!" to which Goose is shocked and in disbelief; We see guys without their shirts on and in only their towels in the locker room; We see some guys without their shirts on playing volleyball; Charlotte and Maverick kiss passionately. It shows them standing in a moonlit room clothed, with him very slowly removing her shirt as they kiss slowly (The camera cuts just before we see any of her nudity). We then see them lying down in a closeup head-and-shoulders shot of them both without shirts and kissing with him on top of her. They slowly French kiss with slow movement and thrusting, and she sensually licks his neck. It cuts to the next morning where shes in bed with the sheet over her chest; We see more of the guys in just towels; Carole talks about how Maverick always goes home with hot women; Carole tells Goose to take her to bed or lose her forever; Charlotte jokingly tells Maverick the same thing as they kiss passionately; We see Maverick at the bathroom sink and mirror in only his briefs; A pilot makes a remark that the MIGs must be close cuz he's "getting a hard on"

Alcohol/Drugs: The guys have some drinks at a bar; Maverick and Charlotte have wine together.

Blood/Gore: Goose has a bloody knuckle during an instructional scene; After a jet ejection goes bad, we see a dead pilot with blood on their face.

Violence: The opening sequence features a dogfight / chase with no shooting; Cougar starts freaking out in his cockpit; An officer accidentally knocks into a coffee-carrying kid; Charlotte and Maverick have a reckless car and motorcycle chase thru the streets; Maverick and Goose lose control of their plane and have to eject; A pilot ejects and cracks their helmet inside the cockpit hatch before it breaks free. We see the body in the water and realize they're dead; Maverick gets up in his copilot's face and grabs his suit and yells at him; A jet gets hit by a missile and explodes; Maverick hits a MIG with a missile and it explodes; He blows up another one; We see bullet holes shoot through the side of Ice's jet; We see more bullets rip through the side of a jet; Another jet blows up; Finally, another jet blows up. Disclaimer: All reviews are based solely on the opinions of the reviewer. Most reviews are rated on how the reviewer enjoyed the film overall, not exclusively on content. However, if the content really affects the reviewer's opinion and experience of the film, it will definitely affect the reviewer's overall rating.