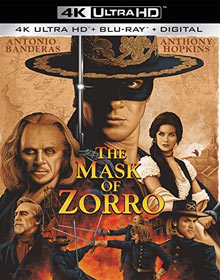 The Mask of Zorro

- for some intense action and violence.

It's the early 1800s. After Zorro's (Anthony Hopkins) last battle for freedom, the evil Spanish governor of Alta California, Don Rafael Montero (Stuart Wilson), discovers his identity (as Don Diego) & throw's him into jail, but not before stealing his baby daughter, burning down his mansion, & accidentally murdering his wife. 20 years later, the "old Zorro" escapes from prison & recruits an old friend, Alejandro (Antonio Banderas), who is now a thief, to be trained as the new Zorro. With both bent on revenge (Alejandro wanting to avenge his brother's murder), Don Diego teaches Alejandro everything he knows & prepares him to defend the Mexicans from Montero, while Diego gets his daughter back. 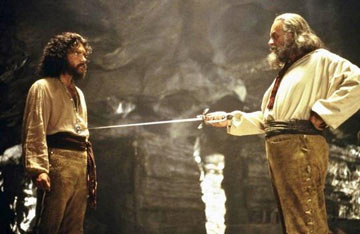 Please forgive the candor, but it's not everyday you revisit a review you wrote 22 years ago while in your teens. Heck, it's hard to believe The Mask of Zorro released over two decades ago now. Directed by Martin Campbell (who would later make one of my favorite movies, Casino Royale, in 2006), The Mask of Zorro brought the latin swashbuckling hero, Zorro, back to the big screen in a huge way. Not only did it brilliantly cast Antonio Banderas in the titular role, but it introduced to us the wonderful and stunning Catherine Zeta-Jones (who would go on to win an Oscar for her work in Chicago). For 2020, the film (and its 2005 sequel) have been given the glory of a 4K UHD release, so it seems like the perfect time to revisit the movie here (and maybe try to salvage my original review... somehow).

For starters, the 4K Ultra HD transfer is quite good, actually. We weren't able to get the disc release for review due to the present pandemic and supplier warehouses being temporarily shutdown, but we were able to view the 4K stream of the film. It's more vibrant and crisp than ever, but like a lot of older films, it can only be so clear sometimes due to the age and quality of the film. Still, most of the movie is super crisp, vibrant and beautiful (only a couple scenes showed substantial grain or fuzziness). Overall, it's a nice 4K transfer and I'd recommend it to fans of the film for sure.

Now... on to (edited) portions from my 1998 review: "The Mask of Zorro is the summer movie for 1998! Despite some content, the acting is superb, the humor is strong, and Banderas makes a perfect Zorro. I enjoyed Martin Campbell's retelling of the famous legendary hero. Antonio Banderas's casting in the role of Zorro is inspired to say the least, and Catherine Zeta-Jones was a wonderful choice for Elena. She's a beautiful actress who shows a lot of promise. I look forward to seeing many more films from her. Anthony Hopkins, who's actually a British actor, is a strange choice to play the original Zorro who passes the torch to Banderas's Alejandro, but he manages to bring a lot of charm and authority to the role." 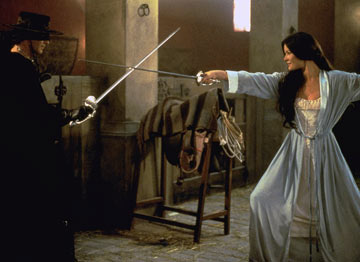 I've seen The Mask of Zorro several times since I wrote this and I think my original feelings actually hold up. It's a strong movie, with solid acting, and a great mix of humor, drama and action. Hopkins does still seem like a strange casting choice (and a few of his acting choices irk me a little with repeat watchings), but overall, he's a great mentor for Banderas's character. And I just love Antonio in this role. I wish they'd made more than just two of these movies (with a true sequel being more of him in his prime than The Legend of Zorro being about his need to hang up the mask). What surprises me each time I watch it, though, is how edgy some of the content is. I think we all have different preconceived ideas of different decades in film history -- like "Oh, it was the sixties, they were able to get away with a lot more then" -- but I didn't feel like the 90's were especially lax on ratings or anything. The violence isn't pervasively bloody, but Campbell doesn't shy away from showing some things. Early in the film, Alejandro and his brother are caught by Captain Love and his brother is decapitated off screen. We only see a bloody necklace hitting the ground, but the next shot shows a bloody bag hanging off the side of Love's horse (clearly containing the head). This comes into play later when Love confronts Alejandro and slides a jar containing the severed head across the table to his enemy. We see the head in the jar clearly, and then Love puts another jar in front of him that contains the severed hand of the brothers' friend, Jack, which is also missing two fingers (His name was Three-Fingered Jack, after all). It's brief, but a pretty dark moment for sure. Other violent moments include some bloody cuts and scratches, and a character gets impaled with a sword and we see it sticking out of their back. For sexual content, there isn't anything too rough; we see the bare backsides of a bunch of Mexican soldiers after the Murietta brothers tie them around a cactus. Some of the interactions between Alejandro and Elena are very sensual, including a dance number, but there's not much beyond some very passionate kissing. Finally, the two have a flirtatious sword fight that ends with him cutting off her nightgown. We briefly see it drop to the floor, with her hair covering any nudity, and then she puts his hat over her chest. Otherwise, there isn't really any language aside from two uses of the semi-crude "peckerwood" and a couple of "d*mn."

Over twenty years later, The Mask of Zorro is still a great adventure film. Again, I wish they'd made more than just the one sequel, but as a franchise, this pair of films is certainly decent. If you're a fan of any of the cast, check this one out. And if you're already a fan of the film and have 4K capabilities, this new transfer is worth looking into.


Since we didn't have the physical 4K UHD combo pack of The Mask of Zorro to reference and just the digital copy, the iTunes digital copy contained the following extras (in addition to a director's commentary):

Unreleased Deleted Scenes (9:37) - There are ten new deleted scenes never released before this year. Most are small moments that totally make sense to cut out, but they're neat to at least see here in a nine-minute montage. In the first scene, Montero goes to the jail to find if Diego is still alive after twenty years. Next, Montero is walking with Luis, talking about the banquet they're going to throw. (Montero seems to sniff drugs while they're walking, too?) It then transitions to him witnessesing Captain Love and Elena in a horseback riding sword challenge (Which shows a new look for Elena that isn't in the film otherwise). The following scene shows Alejandro in the cave while Diego gathers random items to trade for food. Next, at the banquet, Alejandro acts drunk and asks Diego for more champagne. Diego rebukes some of his behavior and gives him more tips on how to be a gentleman. The following bit is some more footage from Elena and Alejandro's dance, with a few more sensual moves. Next, Luis confronts Montero after their big meeting about not being told of Montero's master plans ahead of time. The next scene shows Alejandro trying to snatch the map of the mine from Montero's courtyard. Next, we see Love ordering his men to find Zorro, while the following two scenes show more of Elena confronting Montero about Diego being her father, with the last one being an alternate take where Elena is almost shot by Love (1 "oh my G-d").

Unmasking Zorro (44:58) - This is the original behind-the-scenes featurette from the old DVD release.

Original Deleted Scenes (4:52) - These are the two previously-released deleted scenes. "The Wallet" shows Alejandro stealing a wallet and some jewelry from a rich man and flaunting it to Diego, who rebukes him. "The Resolution" is a lengthy segment that takes place at the end of the film where the country's leader is debriefed after the fight at the mine.

Sex/Nudity: We see some male soldiers' bare butts as they are tied nude around a large cactus; Alejandro cuts off Elena's top and we see it fall to the floor, but her long hair covers any visible nudity; During confession, Elena admits having impure and lustful thoughts about a masked man. Alejandro is hiding in the confessional and tells her she did nothing wrong.

Alcohol/Drugs: Some people are drunk, including Alejandro in one scene; people drink wine and such at a party; etc...

Blood/Gore: Zorro slices a bloody "Z" on Montero's neck; A man shoots himself in the chest and we see him lying there with a slightly bloody shirt. When Love cuts off his head (not seen), we see the bloody necklace the man had been wearing hit the ground in slow motion; We see a bag carrying a decapitated head. The bottom of it has some blood soaked through it; Diego has blood on his sleeve. Diego has a minor bloody cut on his head; A man is thrown against a wall in prison and has some blood on him; A dying man's mouth has blood in it; We see a decapitated head and a dismembered hand in separate jars on a table; A sword impales a man and we see an overhead shot of the sword's entrance and exit through him.

Violence: Lots of swordplay; punching; kicking; slicing; dicing; stabbing, shooting, etc. Disclaimer: All reviews are based solely on the opinions of the reviewer. Most reviews are rated on how the reviewer enjoyed the film overall, not exclusively on content. However, if the content really affects the reviewer's opinion and experience of the film, it will definitely affect the reviewer's overall rating.