This has been one of the easiest tours to book in recent years due to the success and reputation these two artists have, remarked Tony Johnsen, CAA agent. Working with Mike and Third Coast as well as both management offices has been incredible, and were looking forward to filling some great venues across the U.S. this spring.

With sales of over 2 million units, radio hits, media and touring, Jeremy Camp is continuing to make a definitive mark in the industry with his hit songs and ability to capture audiences of all ages. Being named Songwriter of the Year in 2006, and awarded in 2005 and 2006 for Song of the Year, at the 28th Annual ASCAP Christian Music Awards, Camp has marked his place in the Christian Music Industry. With an amazing 13 No. 1 back to back radio hits under his belt, including his first three releases from BEYOND MEASURE, Tonight (CHR), What It Means (AC) and Give You Glory, Camp has graced the covers of Pollstar, CCM, Breakaway and Christian Music Planet, and has also garnered consistent praise from such publications as Billboard, CCM, CRW and R&R with each recording. CCM magazine named him 2005s Readers Choice for Favorite Artist and Favorite Male Artist, and most recently Camp was nominated for an American Music Award for Favorite Inspirational Artist.

With over 8 million career scans, Portable Sounds is TobyMac's latest and highest solo debut ever on the Billboard Top 200 chart (No. 10), and after hitting No. 1 on SoundScan Contemporary Christian Overall chart in its first week as well, the project has scanned over 300,000 units and is still solidly in the top 20 after 40 weeks of release. Along with this sales success, over 100 Christian radio stations played his smash hit singles "I'm For You" and "Made to Love", and after 18 weeks on the charts, "I'm For You." TobyMac released his solo debut (Momentum 2001) followed by the critically acclaimed Welcome to Diverse City (2004), both of which received GRAMMY nominations, and most recently were awarded RIAA Gold Certification. As a solo artist, in addition to rave reviews and a favorite in magazine and internet Reader's Choice polls each year, TobyMac has also won seven Dove Awards, received nine GMA Music/Dove Award nominations, and was recently nominated for an American Music Award as Favorite Inspirational Artist.

Sparrow Records recording artist Matthew West catapulted onto the Christian music scene in 2003 with his debut single, "More, which became the most played Christian AC song of 2004, according to R&R. Since that time, Wests two critically-acclaimed studio recordings, Happy (2003) and History (2005), have yielded such hits as Only Grace, History and Next Thing You Know. A sought-after songwriter, Wests cuts have been recorded by Rascal Flatts, Billy Ray Cyrus, Natalie Grant, and Mandisa, among many others. His latest album, Something To Say, releases January 15 and includes the hit single You Are Everything. 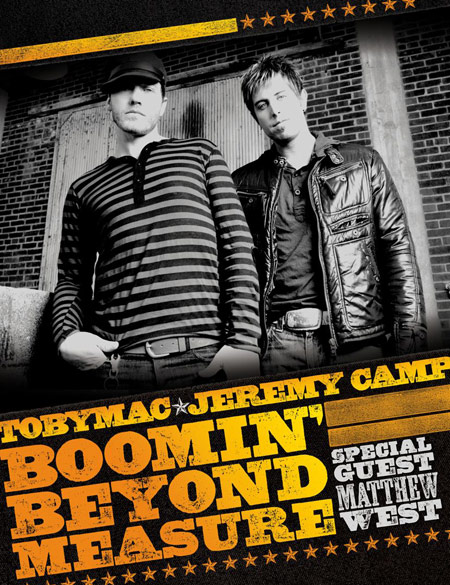