Although we've reported on this recently (July 30th and August 3rd), an official press release was issued yesterday about the Hands & Feet Project's recent storm devastation...

(Nashville, Tenn.) Sept. 5, 2008  The Hands & Feet Project, a childrens village in Jacmel, Haiti that was started by GRAMMY-winning band Audio Adrenaline in 2004, has suffered severe damage from the latest hurricane to hit the area. To make a donation online to help Hands & Feet Project, go to www.handsandfeetproject.org. Contributions via mail can be sent to Gustav Relief, c/o Hands & Feet Project, PO Box 682105, Franklin, TN 37068.

Following the destruction from hurricane Fay, hurricane Gustav buried the village in several feet of rock that came tumbling down the mountain during the storm. Although the overwhelming process of restoration has begun, tropical storm Hanna that hit this week again devastated the village and relegated the children and staff, 48 people in all, to live in one second-story room.

We are in need of much prayer and financial support right now, says Drex Stuart, a lifetime missionary who has previously served in Haiti and heads up the Hands & Feet Project with his wife, Jo. Thank God all of our children and staff are safe. However, we have had major damage to our property, even worse than when [tropical storm] Noel hit last November.

With our property completely buried in approximately four to five feet of mountain rock, we are doing the best we can to begin the clean-up process, continues Drex. Much of our supplies, food, clothes, diapers, formula, etc., have been destroyed and two of the houses where the kids lived were flooded with four feet of water and are currently unlivable. All 36 kids are living in the main house with the nannies.

After Gustav hit Haiti, Audio Adrenaline frontman Mark Stuart and his father, Drex, who happened to be on a break in the US, flew into Haiti with a civil engineer to assess the damage and come up with a plan to protect the village. Following the assessment, the cleanup process began, but after four days of clearing rock and piling them up to make an earthen dam that would eventually be a 12-15 foot high concrete retaining wall with re-enforced steel for protection, tropical storm Hanna came through this week and washed all the progress away.

Our property is about 50 feet wide, but we are also going to help our neighbors finish their walls, because otherwise ours will be ineffective, says Joel Griffith, Hands & Feet project managing director based in Franklin, TN. In total we will build a 200-foot retaining wall covering a Christian school that has 850 kids, the homes and property of five neighboring families representing 50 people and our property housing 36 orphans and 12 staff.

We had major damage to two of our children's houses and we lost most of our property walls, the foundation for our new cafeteria/kitchen. With the retaining wall and purchasing a backhoe to keep it up, we are looking at an estimated immediate need of $100,000- $150,000, continues Griffith. Although at this time we cannot handle supplies because of shipping costs, we are asking for monetary donations through our website, www.handsandfeetproject.org.

As hurricanes Ike and Josephina threaten Haiti yet again, Mark Stuart also urges people to help: Pray for Haiti, its a country that is often overlooked by the news channels when hurricanes happen because there are really no tourist areas. No reason to really pay attention, but its a place that really could use our help.

For more information about this story, including photos, video storm footage, a video plea from Mark Stuart and more, go to www.handsandfeetproject.org. 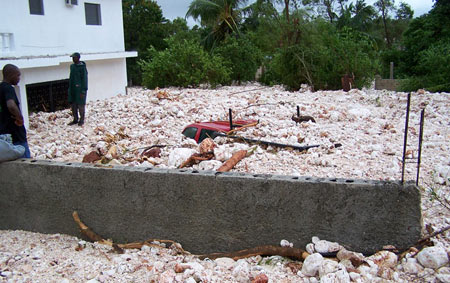 Hands & Feet Projects depot, garage, supply house and apartment are pictured, destroyed by hurricane Gustav. In the middle of the photo is the roof of a large truck buried by the tons of rock that poured down from the mountainside.
###