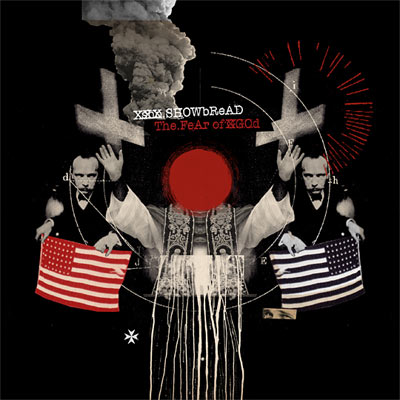 
With the completion of the Showbread's latest album, The Fear Of God, frontman Josh Dies has posted a little reflective blog about the record, along with the new album cover, on the band's website. Below is Josh's blog...

| THE FEAR OF GOD 06/01/09 9:53pm
We finished our new album last week. Since then Ive listened to it a half a dozen times and I intend to keep it up. To me, this is easily the best showbread record so far.

We went into Anorexia Nervosa with the intention of creating a completely spiritually fueled experience as opposed to a rock album. There was a tremendous amount of work involved in the creation of those albums and their stories and in the end we had something that we truly believed in, something we felt was very different and very unique, and something that touched many peoples lives.

What do you do when you finish a double disc, Goth-industrial concept opera with read-along short stories filled with codes and hidden messages? With the band being reborn after several line-up changes and a fresh outlook on everything, the answer was simple: make some Raw Rock.

I think a lot of Showbread fans have wanted to hear something with a feeling similar to our first record No Sir, Nihilism Is Not Practical for a while now. Then there are the people that prefer the less frenetic style we did for Age Of Reptiles and I dont know, maybe there are some Goth kids who want more industrial music out of us. So what does our new record, The Fear Of God, have in store?

This is an intense, passionate record. I think the elements that worked best on our first two albums have really come together to make something unique and edgy. All the emotions are there and coming through really strong, theres a lot of anger and cynicism and satire, a lot to say about the world, theres love and spirituality and God and joy There are songs that affect me deeply as a listener, more so than any other showbread songs, even after so many listens. Its hard and its fast and its chaotic and its structured and its catchy and its melodic and its emotional and deep and its Raw Rock. Straight up, real as ever Raw Rock.

Anyway, with a little ways to go before it finally gets released well be giving updates regularly. Weve got some fun things cooked up, even a contest or two, and all kinds of ways for everyone to participate and help us out even.

In August well be leaving for an extensive tour to bring the new record as well as old favorites, sweat, flashing lights and TV screens and of course: mayhem, to a town near you. But before that well be at Cornerstone festival so come say hello.

Thank you and may Raw Rock kill you forever and ever, Amen!

For more info on Showbread, visit the JFH Artists Database.