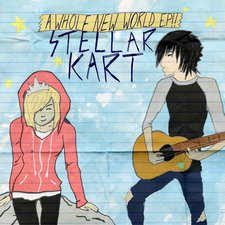 Few things in the world are as timeless as songs from Disney's animated classics. For years, Disney movies like Beauty and the Beast, The Lion King and a lot more have given audiences young and old not only terrific memories, but also fantastic songs to warm their hearts. The songs have been redone over the years by countless tween pop stars (usually released by Disney's own record label), and now in 2011, pop punk group Stellar Kart has gotten the opportunity to put their own spin on a few of the songs for their latest offering, A Whole New World EP.

First up is "Kiss The Girl" from The Little Mermaid. It's a very enjoyable scene in the movie, and when it was covered by High School Musical's Ashley Tisdale, I started to enjoy it a little less. Stellar Kart's rendition strays off the path of the sound they featured on their last album, Everything Is Different Now, and actually takes on a bit more of a Relient K style, though a little less mature sounding. It's some fairly well-done pop punk though, which also reminds me a little of The Ataris. Next up is the title track, from the 1992 film Aladdin. The Relient K vibe is still alive in this track as well, most noticeably in the chorus. With the song being a duet, it would only make sense to include a female singer as well. Stellar Kart's vocalist Adam Agee takes Aladdin's lines, and for Jasmine's lines, the band used the vocal talents of guitarist Nick Baumhardt's sister, Aliegh Shields. With each new classic-style Disney movie that gets released, there's always at least one new song from it that viewers always remember for the rest of their lives. One of the most popular of these is the very welcoming "Be Our Guest" from Beauty and the Beast. Stellar Kart does a terrific job, with a very fun feel and upbeat sound that works very well with the quirkiness of the song. There's even a little bit of a guitar solo thrown in. They stay pretty true to the original version, while giving it their own style as well. The EP closes with the lovely ballad "Can You Feel The Love Tonight?" from what is probably my (and many others') favorite Disney movie, The Lion King. I was a little worried about this one getting turned into a silly pop punk version, but thankfully, the guys do the song justice. It's hard to match the quality of Sir Elton John, and I think I still prefer the original rendition, but I have to tip my hat for the good cover that Stellar Kart does here.

This EP just kind of came out of nowhere for me, but when I found out about it, I thought I'd give it a shot. I do like cover songs, and Disney movies, but it had been years since I enjoyed anything Stellar Kart had done. A Whole New World exceeded my expectations, and it's a very enjoyable EP. Obviously, you'll get the most out of it if you're a fellow Disney fan and if you've grown up watching these four movies. But even if you've never seen a Disney movie, you can probably get something out of this as well.