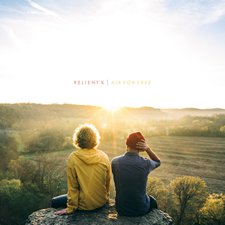 
Relient K has now been around for 16 years now (releasing their self-titled album in 2000). While the band has undergone a lot of changes, the two Matt's have remained -- Frontman Matt Thiessen and lead guitarist Matt Hoopes. 2013's Collapsible Lung saw the band take a very different approach to songwriting, production, and their overall musical product. Thiessen, an excellent songwriter, recruited several co-writers to produce a pop album that released to fairly polarizing critiques. Some critics loved it, but many others felt strongly opposite. Three years later, the band is back at it again. The question on everyone's mind is: will Air For Free be more of a continuation of Forget and Not Slow Down, or the more maligned Collapsible Lung? Well, old school Relient K fans can rejoice! The boys have rejoined with producer Mark Lee Townsend and the sound is more in line with what you expect from the Ohio band.

"Bummin'" opens the album on a seriously positive note. It's not really a pop/punk song, but its pop/rock nature definitely borders on the sound that put them on the map. It's a fun song and has the feel of a summer anthem. "Local Construction" is a great follow-up. The lyrics use local construction projects, which seem to take forever and be constantly ongoing, as a metaphor for the ongoing improvement of one's self. "Mrs. Hippopotamuses'" is another fun number that pays homage to their home state and the Cleveland Browns. The constant chant of "O-H, I-O! Here we go Brownies; here we go. Woof! Woof!" will even have the biggest Browns haters around singing along. (Well, maybe not all Steeler's fans, but I'm sure some will still enjoy the song.) "Cat" keeps the album moving along in a pretty light manner, but "Man" starts to take a more reflective and serious look at things. The lyrics talk about growing up and becoming a man after having wasted time. Thiessen sings, "Wake up, wake up it's time to be man Wave goodbye as I outgrow the shadow of Peter Pan. It's time to be a man." The serious tone runs into the title track and into "God" as well. "Air For Free" is the closest thing you'll find to the music of Collapsible Lung as it is mostly electronic in nature. "God" is one of the most impactful and powerful songs present -- not so much in a "worshipful" sense, but with the way the music connects with the message. Piano carries the verse and pre-chorus while overdriven guitars enter in the chorus to give it a little extra punch. The song is certainly one of the most striking and will likely be a fan favorite.

After a few more reflective tunes, the band turns to some big horns to push the very interesting "Elephant Parade," which picks up the pace for a very different sounding second half. "Mountaintop" follows as a lighthearted love song in which Matt struggles to come up with words to say how he feels. "Sleepin'" is also another song that appears to have Matt reminiscing on a sleepless night, while "Empty House" is a rather large disappointment. What should be a killer Thiessen piano-led ballad is wrecked with unnecessary auto-tune used for the entire song. There's no doubt that some will love the song and look past the voice effects, but for this reviewer, it just doesn't work. Thiessen has the perfect voice for this type of song and the auto-tune only detracts and becomes very distracting. "Flower," however, makes up for the vocals of the previous song and features some Beach Boys-esque "oohs" and harmonies in the chorus. "Marigold" continues where "Flower" leaves off and tells the story of an 8-year-old Matt picking marigolds for his mom who explains that the "flowers" are actually weeds. Thiessen sings a rather touching, "Oh, I'm a marigold... and you picked me," in the chorus. After several piano-based songs comes the three-part "Runnin'." Part one is the most punk rock thing on the album and is a really good section. Part 2 is a little more poppy/piano sounding and tells the story of kid who is placed in a church-based orphanage after the death of his parents. The final piece takes up over half of the track's length and comes across as more of straightforward rock song -- maybe something in the vein of House of Heroes. "Prodigal" begins to wind the album down with an electronic and piano-based song where Matt references himself as the prodigal son. The album closer, "Heartache," is another solid addition and finishes things out on a really strong note.

Air For Free could be described as what Collapsible Lung should've been. This record still has plenty of pop influence, but it's strictly under Thiessen's (and Townsend's) direction. One could also argue that it is more of the logical progression from Forget and Not Slow Down. Either way you look at it, Thiessen writing without co-writers--who just aren't as good as him lyrically--and the transition back to their long-time producer, has led to a stellar return for Relient K. Anyone hoping for a pop-punk record is going to be seriously disappointed as Thiessen remains on the piano for most songs. And let's be honest -- the hopes and chances of them doing another pop-punk record were about nil to begin with. The guys in Relient K have been maturing and growing their sound with every album and Air For Free continues the progression. There are fun songs, love songs, songs that reflect on the past, and songs with other deep meanings. I'm not sure it's their best work to date, but this one is a super solid return to form. If you were disappointed with Collapsible Lung, don't let that deter you from coming back to Relient K now.

Relient K is easily one of the most respected and dynamic bands in the industry. With best friends and band staples, Matt Thiessen and Matt Hoopes, Relient K has been creating timeless songs that meet anyone right where they're at in life.

After taking a few years off between their last release and Air For Free, the pride of Canton, Ohio finally bestows an eclectic and pensive collection of songs. This new record shows personal and artistic growth and nostalgia in a way that is equally specific yet relatable to everyone who listens.

Songs like "Bummin"' and "Man" address themes of self-reflection in the classic tongue-in-cheek way that Relient K fans have come to expect, and tracks like "Prodigal" and "God" touch on faith in a very poignant and personal way. "Mrs. Hippopotamuses'" is a fun, energetic track that pays homage to the band's roots in Ohio. "Runnin" is the longest song on the album, and it is easily one of the most dynamic songs on the record. It gives a punchy throwback to Relient K's pop punk days, and is a delightful treat towards the end of the album. Other highlights include "Mountaintop," "Local Construction" and "Elephant Parade." Air For Free concludes on a softer note with "Heartache," wrapping up the album in a nice, pretty package.

Relient K's latest outing proves the band is far from "has been" status, and continues to create fresh, thoughtful music that anyone can enjoy. - 7/21/16, Cortney Warner of Jesusfreakhideout.com

On their eighth studio release, Relient K brings back their tongue-in-cheek songwriting, shows tremendous creative growth, and displays a matured perspective on life and love that could have only come from deep soul searching. Air For Free may contain only a handful of true standout songs, such as the three-part story/song "Runnin'" and the witty "Elephant Parade," but all 16 tracks work together beautifully to make you smile, make you think, and make you wish there were more bands as fresh as Relient K. - 7/25/16, Christopher Smith

With most of the nuance behind Collapsible Lung lost on many critics (including yours truly), Air for Free is a refreshing return to form. It's easy to call Relient K's eighth studio album the true successor to Forget and Not Slow Down, though it definitely includes the varied nature of Collapsible Lung. It's Matt Thiessen's unmistakable songwriting that holds everything together, covering the emotional spectrum without forsaking the band's trademark fun factor ("Mrs. Hippopotamuses'" is a fun tribute to the Buckeye State). "Man," "God" and "Prodigal" are some of the most poignant material here, and the three-part "Runnin'" is an album distinctive that signifies the band's continual growth after so many years. Though the band has condensed down to just Thiessen and Matt Hoopes, this duo has crafted an effort that exceeds expectations; it's surely in the "best of career" discussion, which is not an easy achievement for a band of this echelon. Don't miss Air for Free, a sure year-end favorite. - 7/23/16, Roger Gelwicks

After a somewhat disappointing (but in some ways still artistically satisfying) effort with 2013's Collapsable Lung, Relient K's eighth full-length release is not only a return to the band's signature quality, but it may just be their most accomplished work to date. The album often calls back to prior releases, such as the tongue and cheek style of their earlier records in the summer anthem, "Bummin'," and the witty "Cat" and "Elephant Parade." The laid back "Sleepin'" and the melancholy "Flower" also draw strong comparisons from the late Forget and Not Slow Down. Yet, Air For Free isn't just a mere reflection. The airy synth of the title track and dominant presence of the piano throughout make a perfect balance between familiarity and originality. It's evident that every song on Air For Free is well crafted and toiled over and the result is nothing short of breathtaking. Where the Ohio natives go next is a truly exciting thought. - 8/22/16, Lucas Munachen