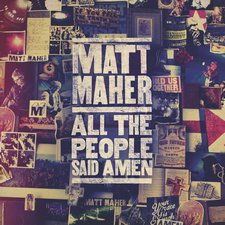 Worship music is never more in its element than when played live, with a host of people onstage and off joining their voices, and perhaps this explains the enduring popularity of countless live albums from Hillsong Church and Passion conferences. While no recording can truly capture the experience, Matt Maher's fourth project with Essential does a fine job representing his best-known songs in their truest form. In a sense, All the People Said Amen is a "greatest hits" compilation, mixing live versions of fan favorites and radio singles with a few new studio tracks for good measure, but the essence of the album, like its patchwork cover art, is a unique snapshot of Maher's career.

The bulk of this record is made up of recordings from a number of tour stops. The setlist looks like a sampling of his biggest songs ("Your Grace is Enough," "Hold Us Together," "Christ is Risen"), and the tracks are arranged seamlessly and produced well, mixed so the crowd weaves in and out, neither overpowering or turning into buried background noise. The tracklist is set up so it feels like a full show from start to finish, and the exchange between the crowd and the band captures the energy and experience as well as a live album can.

While a lot of current worship bands tend toward a huge arena sound with emotion-stoking guitar builds and dramatic key changes, Matt Maher seems to have found a comfortable place between mass appeal and the darker, earthier sound usually found in independent fringe artists. In his past two albums, he's experimented with country, Southern rock, and blues, and the grittier Americana vibe is well represented in energetic versions of "Hold Us Together," "Turn Around," and "On My Way." This heavier sound is balanced by popular worship anthems "Your Grace is Enough" and "Christ is Risen," songs that could fall into the trap of generic worship, but actually thrive in their familiarity when let loose in a concert setting. The two softest moments arrive in a live version of "Adoration," a gently meditative acoustic-driven piece, and a new studio track, "Mighty Fortress." Still, mixed with a surprisingly upbeat batch of songs, even these don't cause the record to lose momentum.

Interspersed with the live set are four new studio tracks that are decent, though not exceptionally unique. "All the People Said Amen" plays lightly with the country pop flavor, while "Burning in My Soul," a familiar song to Passion 2013 attendees, feels like standard worship fare, with a catchy chanting chorus, lyrics about fire and revival, and just enough gang vocals to inspire a singable vibe. Probably the best of the new songs is actually the first radio single "Lord, I Need You," a co-write (and duet) with Audrey Assad. The gentle, hymn-like feel pairs the two singers well in a reflective moment that makes the right fusion of their two styles.

Probably the most remarkable thing about All the People Said Amen is how it represents Matt Maher's work even better than the original versions. The songs are arranged and produced well, capturing the energy of the live show in a way that sounds like all the people involved are truly enjoying themselves. It's not a groundbreaking live record, but it does showcase Maher's songwriting and stage presence better than a standard hits compilation could. Including all his biggest songs together in one place makes this a natural choice for someone who may want to have his radio hits and church favorites together in a different presentation.