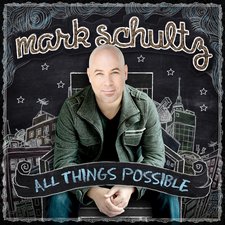 Mark Schultz has made a name for himself in Christian music with the "story song," the kind of tune with a concrete narrative that sounds like a sermon illustration in three verses and a bridge. Many of these stories came from both his days as a youth pastor and from letters sent in by fans, and were the bedrock pattern of his first four or five albums.

Schultz breaks from that pattern on All Things Possible. With anthemic songs aimed straight at the Casting Crowns / Mercy Me audience, Schultz points straight for the rafters on every single tune with thick and glossy production worthy of American Idol. With the title track celebrating the God that makes "all things possible," Schultz should make plenty of inroads with Christian radio play lists.

The album takes a break from reaching for the sky with its forth track, "I Gave Up." With a slight nod to The Beatles musically, Schultz makes a list of the things that he has or would give up because "that's not the reason I'm living." Set against a fun, swinging backdrop of horns and background vocals, and ending with a New Orleans "When The Saints Go Marching In" coda, this song proves to be as fun (and somewhat poignant) a song as Schultz has ever written.

The next song, "Love Walked In," reverts a bit to the old story song formula, but nevertheless presents a heart felt series of vignettes about Jesus changing lives. To Schultz's credit, he does present such time-worn (but never out of fashion) themes as personal testimony with honesty and care. This careful crafting allows songs such as this to rise above the cliché' status that it could have quickly turned into.

Schultz's heart and humor comes through best on "Haven't Met You Yet" where he regales his soon-to-be-born child with tales of how much the baby is loved even though Schultz hasn't even met him or her yet. A bouncy tune that should hit the target with parents-to-be, this song shows Schultz's talent for celebrating the ordinary experiences of life in song form.

Proving himself to be a competent songwriter (he could probably pen a solid country hit tune or two for Nashville's music row), All Things Possible unfortunately suffers from the same over-production as much of Schultz's adult contemporary peers. Peeling back the layers of sound would let his songs breath a bit more and lend weight to his poignant and sincere lyrics and melodies.