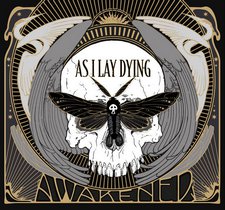 As I Lay Dying
Awakened

As I Lay Dying has been on the scene since the beginning of the millennium, and is often held in high regards as one of the "best" in their genre, along with The Devil Wears Prada and the recently disbanded Underoath. Since their inception, the San Diego natives have performed on large tours and events like Warped Tour and Soundwave, and even racked up a Grammy Award nomination in 2008. Continuing their momentum, they entered the studio in January 2012 with producer Bill Stevenson to create their latest effort, Awakened. Back in June of 2012, As I Lay Dying released their first single, "Cauterize" for free over a 24 hour period, thus giving fans an indication on what the new album was going to sound like. Awakened was finally released on September 25, 2012, peaking on the Billboard 200 chart at number eleven.

Awakened opens up with "Cauterize" and it is a hard-hitting tune that will most likely become a favorite during concerts. The record continues the same pace with tracks such as "A Great Foundation," "Resilience," "Wasted Words," and "Whispering Silence." "Overcome" opens with a low-key guitar intro, only to kick into more screaming vocals from Tim Lambesis. It provides a great intro that builds the tension and anticipation for one of the album highlights. Up to bat and on deck are "No Lungs to Breathe" and "Defender," both solid tracks. The album takes a brief moment to break up the momentum with "Washed Away," a one-minute-and-one-second filler/intro track in to "My Only Home," a track that revs the engines up to full throttle again. The album closes with "Tear Out My Eyes," and it ends Awakened on a high note.

As I Lay Dying's Awakened does not only deliver an ear load sonically, but the lyrics prove to be top notch as well. The lyrics match the aggressiveness of the music, with statements and questions concerning obstacles in life, struggles within one's mind, and becoming stronger. These lyrics encompass an earnest, if not militant, feel to them.

Awakened is a strong release that has been hailed as one of the best of 2012 in the hardcore scene. This record has few, if any, downsides and the only issue listeners may have is that it's a bit repetitive as far as song structure goes, but giving the genre it's in, that kind of thing is almost to be expected and is fairly easy to disregard. Aside from that, As I Lay Dying has crafted an excellent album that will not only appease fans' appetites, but also keep them hungry for more.