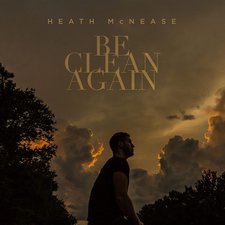 
Back in 2010, singer/songwriter and handsome rapper Heath McNease began a trend of releasing multiple albums a year. Between mixtapes, collaborations, and studio albums, it wasnt uncommon to get three releases a year from McNasty. So having nothing but some singles from him over the last few years has left fans wondering and waiting. But we can now safely say that its been worth the wait, because Be Clean Again is finally here, and its pure excellence.

One of the best things about Heaths music is that you can always expect to be taken for a ride musically. Sometimes its a folk song, sometimes its a rap song, and a lot of times, its both. The opening track, Needle, is the perfect blend of the two, with some additional elements. A fair dose of pop is present, and he even sneaks in a little bit of dubstep, albeit in the absolute mildest of hints. Cross My Heart is a slow jam of a hip hop track, led by a mild-mannered acoustic melody. The hook features some really high-pitched vocals that get stuck in my head. Its followed by one of my favorite cuts from the entire record, Believe. Originally released as a single in 2017, Believe features JGivens and Propaganda, giving the song three unique styles of rapping that all come together in sonic perfection. The music starts to feel a little darker from here. Call Me is probably the closest thing to a rock song Heath has ever released, and Good Night and Good Luck sounds apocalyptic. JGivens comes back for another verse, and we also get a much-welcomed verse from Krum, as well as a special appearance in the hook from Jordan Coleman, who produced the album (as well as Heaths last album, from 2016, Who Knows? Who Cares?). The last few songs bring the tone back around to a more lighthearted feeling (with the exception of No Victims), concluding on an anthemic and hopeful title track.

Musically and thematically, Be Clean Again is quite similar to Heaths 2012 album, Thrift Store Jesus. There are plenty of tracks that touch on the darker side of life. Chemo takes the perspective of someone trying to cope with terminal illness and failing at it. The song highlights the reality of what a person might be experiencing, such as depression and hopelessness, while trying to find meaning in sex, money, etc. Good Night and Good Luck fits its apocalyptic sound with Heath rapping about what sounds like the end of the world, but isnt too far off from where our society is now (The whole world looks like Normandy and Florence, like Operation Overlord and Normandys for tourists, the whole world looks like Columbine and Pulse, hate gets the platform thats swallowed by the pulp fiction zealot pouring arsenic thats swallowed by the cults, and they burned down abortion clinics, they burned down churches, synagogues, and the Mormon temples, and they burned down the mosque while youre worshiping in it, and they say that war and dissonance is the new world religion). One of the strongest tracks, which is also the most vulnerable this time around, is "No Victims." Pen Pal Jetty Rae provides her gorgeous vocals for the hook, while Heath opens up about his failures and shortcomings. From his love life to his insecurities about his age, music, and more, "No Victims" takes the listener on an emotional journey into the darker parts of his life, in much the same way as Thrift Store Jesus' "Groundhog Day."

Despite the weightier issues presented here, Be Clean Again is ultimately brimming with hope, particularly in the latter half. Another terrific track, perhaps my overall favorite, is "More Good Than Bad," which encourages the listener to forgive and move on from the people who hurt you. It's a therapeutic song and a wonderfully Gospel-centered idea. Heath begins the song saying, "I put on that Oasis, that 'Don't Look Back In Anger,' yeah that's the banger, I roll down the windows like every cliche and I loudly proclaim it, tell the ones that broke you to go in peace, I play that 'Sgt. Pepper's,' she's leaving home and I let her, too proud to go and get her, I sing that falsetto like I was John Lennon and think of her letters that said 'PS babe, go in peace.'" Fellow FREE DAPS member Keyes comes in for a highly memorable third verse, saying, "When I say to put your lighters up, it's not 'cause it inspires us, it's to burn the list of people in our head who lied to us and spited us." The song doesn't merely write-off the darkness presented before it, but instead serves as a reminder of God's grace, which redeems and enables us to forgive those who have trespassed against us. It culminates in the title track, which features a lovely display of humility. Acknowledging his own sinfulness, yet never letting it overshadow Jesus' redemption, Heath says, "I'm the woman at the well, You tell me everything about myself, I'm the nine that walked away, I wish I'd been the one that chose to stay, I'm the one they called a whore, You told me go and sin no more, I'm the thief that's by His side, He'll remember me in paradise," before beckoning the listener to "come to the well, be clean again." The lighter tone complements the theme of the song incredibly well, and it closes the album majestically and beautifully.

There's so much to say about Be Clean Again, whether you want to talk about the music, the guest appearances, the lyrics, or what have you. But the best way that I can sum it up is to say that it's an album that will challenge you to love people. Whether it's the people who can't find peace ("Chemo"), the people who feel like failures ("No Victims"), or the people who broke you and aren't sorry ("More Good Than Bad"), we all need to be clean again. As part of a solid discography, this stands out as Heath McNease's masterpiece. Make sure you don't let this album pass you by.

Let's get this out of the way: Be Clean Again is Heath McNease's best album yet. It is a work of peculiar beauty, effortlessly marrying the hip-hop and singer/songwriter sounds that Heath has alternately dabbled in throughout his career. It is also a brutally honest, often heartbreaking, finally redeeming piece of lyricism. This is an album from a man leveraging his status as a perpetual industry outsider to write with the kind of openness and transparency that few songwriters in Christian music are able to muster. Coming alongside are other oddballs in the business, like Propaganda, Krum, and JGivens, providing their own insight. Be Clean Again speaks to the brokenness in all of us, as well as the brokenness we bring into our faith and our institutions. Yet, it does not fail to point to redemption, as it does in album highlight "More Good than Bad" and the eye-opening title track. This is an album that could have only been born after years of honest struggle both personally and as an artist, and it is worth every minute of the ride. - Review date: 3/12/19, Timothy Estabrooks of Jesusfreakhideout.com

Sometimes an album can be so insightful, so meaningful, so intimate, and so musically compelling, that it simply needs to be heard to be believed. As such, there isnt much that can be said about Heath McNeases latest project in a brief review like this, other than simply that if Be Clean Again isnt sheer perfection, it can hardly come much closer. - 3/6/19 Mark Rice