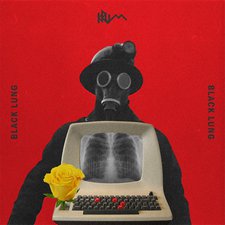 
Krum, formerly known as Playdough, is a legend in the underground Christian Hip Hop scene. Releasing a plethora of albums and mixtapes by himself or with others, he is one artist that has released consistently excellent music throughout the years. You can usually hear him spitting slick rhymes with smooth vocals. However, this time around, he decided to take a backseat and be in the production chair. Thus, we have 30 minutes of pure musical, head-bobbing bliss with Krum's latest offering, Black Lung.

This is underground hip hop at its finest. Each track is unique and similar in all the right ways. The production sounds simple, yet carefully constructed. Krum has gifts both in rapping and producing.

Like I said before, he doesn't rap once in this album. He has some of the best rappers you've probably never heard of on Black Lung. Each rapper brings his own unique style to their tracks, which brings this project to a whole new level. You've got some relatively popular artists, such as Propaganda and Derek Minor. Then you have lesser known artists such as JGivens, Pigeon John, Theory Hazit, and Heath McNease. You also have some members of Deepspace 5 who lay down some epic flows, such as Manchild (of Mars Ill), Syntax the Terrific, and Freddie Bruno. To have this amount of skilled guest rappers on one project is astounding of itself.

With amazing production and top-of-the-line guest rappers, this is a project that you don't want to miss. Krum has outdone himself on this album. He poured his heart and soul into this project. What else can I say about Black Lung other than this is the best rap album of 2021.