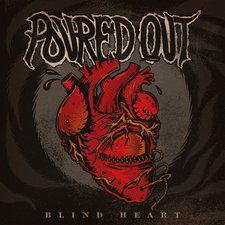 
If your hardcore band wants to make a name for itself in today's music scene, it has to do one of three things: a) be exceptional; b) be a band that has already made a name for itself; c) both a and b. Hardcore bands come and go all the time, with only so much as one mediocre album to show for it all. The newest Facedown Records signing is hoping to not fall into that crowd. Getting recognition from a major label while the band is still in its infancy says a lot about the label's opinion of Poured Out, but what does the band's debut have to say about them?

Poured Out comes out of the gate strong, with a fierce opener called "Unconditional." The song shows that the band is very confident in their chosen profession, and also gives us a glimpse of who they are, musically. Poured Out starts with a traditional hardcore backbone and adds some heavy metal tendencies, the latter of which is most notable in their style of guitar solos. They also seem to have a way of unpredictability in their arsenal, and in this way they remind me of The Chariot. Though the similarities pretty much end with that one personality trait, they do use a lot of the infamous feedback The Chariot so often relied on in these fives tracks. "Hymn of a Broken Man" features a minute or two of only feedback and melodic, calm guitar near the end of the song. Their self-titled song goes on to feature heavy gang vocals and a barrage of breakdowns; incidentally, I feel comfortable citing this as the EP's highlight.

Blind Heart is just a quick peek at Poured Out, so it's tough to really form a long-standing opinion on their future in the industry. But it's easy to see the potential. Their brand of raw and slightly unconventional hardcore make for a well-spent twenty minutes, and I've heard that they're working on a full-length album, to which I'd glady spend some more time listening.

Facedown Records has really gotten good at finding the hidden gems in Christian metal. Compared with the past, when other labels had the leg up on what some might call "higher production" music and Facedown merely produced the grungier or lesser-known bands, this should now be considered their greatest achievement. Amid the swell of overstuffed, high-production copycat bands, Facedown excels at building up the black sheep of the industry. Maryland-based quintet Poured Out is a blast from the past as well as a blast of fresh air. Or rather, old, metallic air you haven't breathed since the 90's. Their raw, gritty metal is heavily weighted by hardcore breakdowns and blast beats. They pull absolutely no punches, firing off like a steam engine from start to finish. Unlike much of the Christian metal scene, they make no apologies in their music, offering no contemplative interludes or clean singing choruses. It's just brooding, punishing, dirty 90's hardcore-infused metal -- like a rusty, tetanus-tipped nail in the foot. And I mean that in the best possible way. It's not that they're the only band writing this style right now, but within the Christian music scene, it's a real treat. And Facedown is one of the only sources in a rush to supply it. Keep an eye out for their first full-length release this summer. - Review date: 4/6/16, Wayne Reimer

Poured Out have recently signed to Facedown Records and in turn are re-releasing their Blind Heart EP while gearing up for their full-length debut. This 5-track EP harkens back to the Facedown glory days when bands like Seventh Star and Figure Four ruled the roost. Not that the label's current line-up isn't strong, but there is just something about that era's hardcore sound. The production is cleaner and the recordings are crisper than in those days, but Poured Out definitely channels that punk inspired brand of hardcore music. "American Justice" likely takes the cake as the top track, but "Hymn of a Broken Man" is a fairly close second. "Beloved" -- which borrows from the hymn "Rock of Ages" -- is also a pretty sweet jam. Hardcore fans will want to grab this EP and should eagerly await the coming LP. - 3/12/16, Michael Weaver of Jesusfreakhideout.com