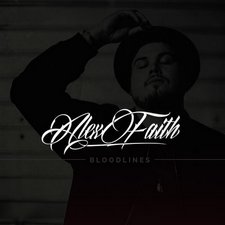 
Collision Records is starting to really impact CHH lately, and Alex Faith is right in the middle of that movement. Earlier this year, he teamed up with Dre Murray to deliver Southern Lights: Overexposed, which is one of the best rap albums that has been released this year, and now he's dropping his second solo album titled, Bloodlines. What does the Atlanta native (and the whopping eight featured artists listed) have in store this time around?

Alex's sophomore album has some rather serious tones and you'll catch these messages early on in the tracks "Freedom" and "Dark Matters." The former features the outstanding vocals of Cortney Orlando, coupled with Alex's rapping about struggles growing up the South and finding true freedom in the Savior, while the latter hits home on the current situation of police and black lives. Alex drives his heart home while spitting, "My desire is for unity. I don't hate the law, but I do believe that it's flawed." And with the powerful words of Adan Bean, about being racially profiled, closing out the track make for a most powerful song. Bloodlines doesn't stop there with the serious vibes; "Never Let Me Down" is a solid track hitting home with that nostalgic side of hip hop about God's protection in our lives and "Stillborn" is a raw, honest account of Alex losing his son, the dire struggle that ensued, and his relying on God to finally make it through.

Not every track is as good as those mentioned thus far. While "Clayco" and "Pressure" feature solid beats and good guest spots, they fall a little flat. Most of the album is positively focused, but there are times that Bloodlines is a little simplistic in its production and lyrical content. This album is pretty good and worth taking the time to check out, though, especially if you like Alex or that Dirty South hip hop.