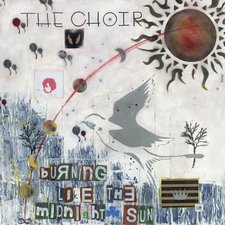 So few bands today, Christian or secular, can make it past their first album before disappearing into the distance. With that being said, The Choir (formed way back in 1984), have just released their 11th studio album, Burning Like the Midnight Sun. Who would have ever thought that a Christian alternative rock band, almost psychedelic at times, could last 26 years? One listen to Midnight Sun will answer that question. Two or three listens will have you wondering, "Why don't I own all of The Choir's albums?" Derri Daugherty (vocals) and Steve Hindalong (drums/lyrics) have done it again.

The album kicks off with the song "Midnight Sun," taken from the title, which features a reverb guitar line, saxophone, and some nice ambient sounds. The lyrics speak of perseverance in relationships and give several analogies of things that fade away or disappear, but proclaim, "I'm not going down behind the mountain, I'm never going to fade away. I'm burning like a midnight sun." Hindalong catches you off guard with his nice use of the term "chemical fire" in the lyrics as he describes his unrelenting desire to remain like the midnight sun.

The next two tracks, "That Melancholy Ghost" and "Mr. Chandler," were inspired by true events. The former is a song that speaks of how sometimes tomorrow can seem so far away and that problems seem like they may never go away. Hindalong tells a story about he and his teenage daughter, in which he knew he could not fix her problems, but listened and told her, "Sad child, go on and cry." The latter is a comical story of the band in an airport while on the way to Canada. Tim Chandler's name on his ticket was spelled as Kim Chandler. The song references this and the rest of the conversation held by the airport employee as she told him, "Mr. Chandler, you have a fraudulent ticket."

The next two tracks shift the album to a more serious tone. "Between Bare Trees" is a beautiful acoustic guitar song that is about Hindalong's wife and marriage. The lyrics of the verse contain a darker imagery, but the chorus is more hopeful with the lyrics, "Rivers of love and peace flowing over you and me. Slivers of silver-blue between bare trees." "A Friend So Kind" is quite possibly the best song of the album musically and lyrically, maybe one of the best Choir songs ever. The song is a slower acoustic guitar track with heavy ambient noises throughout. The lyrics are in memory of a great friend of the band (Tom Howard) who made time for everyone in his life. Hindalong pays homage to his friend in this song by saying, "It would be a divine aspiration to be a friend like Tom," in the album's commentary. The song does, however, contain a lyric that may be mildly offensive to some listeners: "And we're sadder than hell, 'cause we miss you dear friend. Still it's good to know you're great heart is glad and restored; forever smoking fine cigars at the table of the Lord."

The band shifts back to a happier mood with two more songs about themselves. "Legend of Old Man Byrd" is about Marc Byrd, the bass player, and is a top three song on the album. It was a song originally written as a country song and sung at his 40th birthday. Though the country version is probably good in its own right, this version is outstanding. The song has a great feel and some fine guitar playing. "I'm Sorry I Laughed" is a song about sax player Daniel Michaels. Michaels once fell during a live show and bent his saxophone as the rest of the band laughed. The song reflects on that memory with heavy ambient sounds and saxophone. Another possibly mildly offensive lyric is found in this song as Hindalong tells of the fall, "The stage was 4 feet high, wouldn't blame you if you cried; your '63 Sembler bent to hell."

The next three songs focus on content that is more spiritual in nature. "The Word Inside the Word" is about love. The song was inspired when Byrd told Hindalong, who was frustrated trying to reconcile biblical scriptures, "It's the word INSIDE the word; it's love." "It Should Have Been Obvious" looks at the history of Christianity, as well as everyday events, in which Christians do stupid things not realizing they were wrong when it was so obvious looking back that they were. "Invisible" is one of the most upbeat songs on the album. The great sounding guitar work continues, as this is among the top songs on the album. Hindalong comes up with some more great lyrics as he writes about a "Miraculous Joy Elixir Jar." He explains the term by saying that the "miracle elixirs" of the older days were nothing but alcohol. He also says an old preacher they know called alcohol "joy juice;" thus the aforementioned term.

The album ends on a perfect note. "Say Goodbye to Neverland" is a slow piano song featuring ambient sounds. The song is about the loss of innocence and the fact that you cannot go back to certain things or places in your life. The lyrics talk about the responsibility of growing up and living in the now, "Breathe in breathe out heart don't fail; embrace the moment."

If you are looking for a new album just to rock out to, The Choir's latest release is not for you. But if you are looking for a new album that you will thoroughly enjoy, or a new album to fall in love with, this album is an ideal choice. This is easily one of The Choir's best albums, if not their best to date. Burning Like The Midnight Sun is an unbelievable display of writing, vocals, and musical ability; it only gets better with each listen. The use of obscenities, even though mild in nature, is disappointing to find on a Christian record; this is the sole reason the album falls short of a perfect star rating. This is sure to be a classic and The Choir has a lot to be extremely proud about with their latest musical accomplishment.