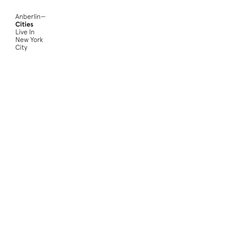 
To start out, I must make a disclaimer; live albums personally aren't my thing. Therefore, the idea of a track-for-track identical live recording of a previously-released album seems like a totally unnecessary novelty to me. However, that does not mean that live recordings can't be great, enjoyable listens that possibly shed new light on each of the songs within, or give a taste of what a live show would be like if one were to attend. Or that they can't serve as a memorium for a special night of a once-loved-now-defunct band on their final tour. This is exactly what Anberlin's Cities: Live From New York City does.

Cities is quite possibly the average Anberlin fan's favorite album from the band (yours truly included), so the appeal of novelty and nostalgia is present in full force from the very first listen. The most notable thing about Cities: Live is the fan participation; Stephen Christian often backs away from the mic and lets the audience sing as a mass choir in his place. This band has no small following of dedicated and loving fans, and this album shows it. Aside from that, the songs sound very similar to their original counterparts (sans an expanded role of Christian McAlhaney's background vocals). The obvious exceptions are "Dismantle. Repair.," which has added a new hook, and "fin*," which cut off the two-and-a-half minute outro and added a sub-chorus ("We'll live forever, forever, forever"), originally from Lowborn's "Harbinger." I also found one lyrical change very interesting in "Inevitable," where Stephen sings in the second verse, "We end up married to the only ones we really love," instead of the original lyric (which was actually one of my favorite Anberlin lyrics), "We end up hurting the worst the only ones we really love." I would be interested to know if there is a story behind that lyrical change (though I do understand that the former lyric is how the band usually sings the song live). But overall, in short, the album isn't unique enough that you don't totally know what you will be getting when you listen to it.

If you are an Anberlin fan, Cities: Live is a great item to collect, and indeed, you probably should in any event. It is an album that is hard not to love, even if only for nostalgia. For all others, though, this recording won't have quite the same effect; it would be better to start with Cities, or any of Anberlin's other studio recordings, first, and grow to love them before giving Cities: Live a listen. Of course, I can recommend without hesitation Anberlin's studio albums.

What self-respecting rock fan doesn't like Anberlin? Seriously. Since 2003, they put out great album after great album. With their return to Tooth & Nail for their final studio album, it seemed like the boys were getting their proper send-off into the annals of greatness. But it is Tooth & Nail, and - God bless 'em - they're taking every opportunity to milk their regained ownership of all things Anberlin. After the band's grand finale last year, the label released a live recording of the band's sophomore album, Never Take Friendship Personal, and now Cities is getting the Live From New York City treatment. I may not have many that echo this sentiment, but I've never really thought Stephen Christian had great live vocals. The live Cities only serves to back up my opinion, but it's great to hear this treasured album in a live setting. Of course, there are more elements to consider in a live album, like in-between-song-banter (which seems pretty generic here) and fan interaction (which we can't accurately judge on simply audio alone), so ultimately, Cities: Live From New York City is a collector's item. It's not really worth investing in the album unless you're a massive fan and you must have all things Anberlin, in which case, you've probably already pre-ordered the live Never Take Friendship Personal/Cities double vinyl. Otherwise, it's not something to get excited about. - 8/1/15, Scott Fryberger of Jesusfreakhideout.com