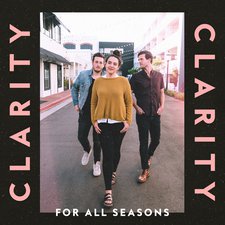 For All Seasons
Clarity - EP


"Retro" is a word that gets thrown around a lot in music circles. In the last few years, Mumford & Sons featured banjos and suspenders heavily, and were proud of their turn-of-the-century (the 20th one, that is) vibe. The Killers gamely returned to the synth-heavy, New Wave sounds of the 1980's and made something familiar, "alternative," while The Lumineers, the new kings of folk, channeled 60's era Bob Dylan. In the CCM world, Rend Collective likewise made old-timey Irish dancing music fashionable again, and used it to create something new and fresh in worship circles. Last year, Hillsong United made a record, Wonder, that (at times) sounded like 80's-era Phil Collins and Don Henley (consequently, two mainstream artists I still love) and turned out big choruses and keyboard sounds that could have come out of a thirty-year-old time capsule.

California's For All Seasons follows that 80's era pop path with their major label debut, Clarity, and creates big, worshipful pop moments that will put a smile on the face of anyone who listened to the radio thirty-plus years ago. In fact, For All Seasons is so retro (whether intentional or not), that they channel iconic CCM veterans such as Twila Paris and Margret Becker.

It all starts with the big, wide-open voice of lead singer Emily Hamilton. Similar to Hillsong United's Taya Smith (singer of "Oceans" and "Touch The Sky"), Hamilton's powerhouse voice is put front and center of each song (a hallmark of 80's pop) and is a mighty instrument in its own right. Opening track "Higher" channels the kind of West Coast sound that Bethel Worship has been turning out the last ten years, and immediately grips the ears. Anthemic and uplifting, "Higher," and the following "No Other" and "Bigger Than," might sound a bit dated, but there is no denying the power and melodic hooks of this opening trio of songs. Title track "Clarity" rocks an interesting slide guitar and a great keyboard line that's not afraid to stand out.

Unfortunately, the remaining few tracks fail to distinguish themselves very much, and at seven tracks, it's not clear whether Clarity was meant to be considered an EP or a short full-length album. With a few more songs along the lines of the first four, this album would have been a really good debut, but in its current form, it falls a bit short. But there are good things ahead for the "Seasons" crew, and the future is bright indeed. The 1980's haven't sounded this good in a long time.