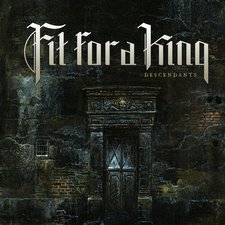 Fit For A King
Descendants (Re-Recorded)

2013 was a big year for Texas-based Fit For A King. In March, they released their very successful Solid State debut, Creation/Destruction. They quickly followed it up with a re-recorded and remastered version of their 2011 indie release, Descendants. In some ways, Descendants is better than Creation/Destruction; the sound quality has been upped in a very big way. It's extremely polished, but not too much to the point of removing any edginess. The lyrics are much more profoundly Christ-centered too.

Beginning with a short intro track, "Il Diluvio", Descendants hits the ground running and wastes absolutely no time trying to kick up the intensity with the opening track, "Ancient Waters." The song is a typical FFAK track; Ryan Kirby's growls carry the song throughout its verses, while the clean vocals soar during the chorus. During the song, there are breakdowns galore. It's a standard metal song, but still has enough redeeming qualities that make it stand out as an album highlight.

Descendants boasts a few guest appearances in the songs "Parallels" and "The Architect." The former features Jeremy Gray of Ivoryline fame. His high-octave vocals carry the song for a brief moment, while the latter displays a perfectly brutal and intense performance during the bridge from Memphis May Fire lead vocalist Matty Mullins.

"Hollow Eyes" kicks off the second half of the album, following the blisteringly heavy title track. "Hollow Eyes" and "The Roots Within" deal with personal struggles, lust, and the weight of sin. "Transcend" completely halts the momentum that had been built up from the previous tracks. Despite being a sole ballad in the midst of metalcore, it's not a bad track. I feel like they could've gone without it, but it's still a nice addition to the album.

"Unchanging" picks things back up where they left off. The song feels like somewhat of a filler track, though. There's nothing too special or nothing that stands out. The album closer, "Keep Me Alive," however, finishes the album on an extremely high note. The song was not featured on the 2011 release. It was written and recorded for this re-release. The song tackles the topic of self-loathing, depression, and leaning on God to help you through trials. It's an excellent addition to the album.