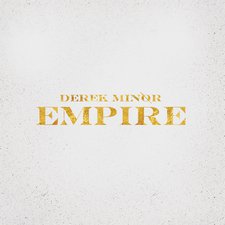 For those not familiar with Derek Minor, he has been around for quite a while, formerly known as Pro. The track "Dear Mr. Christian" from 2013's album Minorville originally caught my attention and I'm glad it did. This hip hop veteran has a lot to offer and should no longer be flying under rap fans' radar.

Empire starts off with a nice intro track before hitting listeners with "All Hail The King," featuring labelmate Deraj and Minor's former road manager nobigdyl in a track with a great pace, superb flow, and amazing production, all while hitting in the greatness of our God. "Who You Know" follows suit with that thumping feel in a track about people looking for real believers instead of just blowing off Christians. Later on, "Stranger" is a call to Christians to love one another and to not be judgmental, and both are great messages for all to hear. Other sold tracks are "Empire," "Slow Down," and "Kingdom Come."

The album is filled with hip hop elements blended nicely with R&B undertones, displayed in tracks, such as "Last Forever" and "Right By My Side," which fit nicely together. However, there are two tracks that stand out for stepping outside of that hip hop box, and both come out wonderfully. "Fly," featuring Colton Dixon, showcases two different talents doing what each does well, and "Oceans" features Move Aside in a beautiful track that takes me straight to dreams of Hawaiian beaches. Finally, the absolute best collaboration here is Minor and Social Club on "Party People," which comes out perfectly and I suspect will be played at many house parties to come.

It is truly hard to find flaws on Empire, but if I had to be nitpicky, I could say I am not in love with the "Babel" interludes, or that not every track is absolutely stellar. Overall, however, there isn't really anything bad here at all. The beats are amazing, the rapping flows wonderfully, and there's an abundance of great guest spots. All rap fans need to grab this album as it has the potential to be the best hip hop album in what is gearing up to be a great year for hip hop music.

- 1/29/15, written by Kevin Hoskins of Jesusfreakhideout.com

Derek Minor has been slowly gaining some notoriety in the CHH scene. His last album, Minorville, definitely helped to build his reputation. Minor is back with his latest, Empire, and he is showing that he's not looking to back down. The tracks continue to hit hard this time around and some of the lyrical cleverness found in Dyin' to Live returns (on a smaller scale). It's a bit interesting that Empire released only a few weeks after the widely advertised television series of the same title. While the television series is about a worldly empire built around a record label, Derek's album is a comparison to that same type of empire and God's forever empire. An example of these comparisons can be found in title track (about God's empire) and "Kingdom Come" (about a worldly empire similar to the one portrayed on the show). The most telling portion of "Kingdom Come" is the faux news story at the end. The reporter is talking about a crash that killed 'business tycoon Derek Smith' and warns, "This wreck has caused major damage and heavy traffic; if you're headed in this direction I suggest you take an alternative route." Other songs that stand out on this release are "Who You Know," "Slow Down," the completely relaxing and out of character "Oceans," and "Party People." Empire is definitely in the running for the best Derek Minor/PRo album to date. There are only a couple of missteps along the way. The Babel interludes (meant to break up the record into three sections) are too long and aren't that enjoyable in the grand scheme of things. Also, "Stranger" just seems like it would've been better served as a single and not included here. Overall, Derek Minor had released another solid album chock-full of different hip-hop styles, great beats, and even better lyricism. - Review date: 2/23/15, Michael Weaver