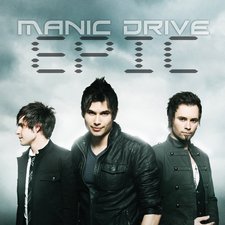 With each release since their debut in 2005, Manic Drive's sound has been continually evolving. Their latest offering, Epic, may mark the end of this evolution. The aggressive alt rock flavor of Reason for Motion and Reset & Rewind has been thoroughly replaced by the pop/dance feel that began to emerge in their 2009 release, Blue. While Epic still constantly proclaims the band's beliefs, the obvious change in sound may come to the dismay of many fans.

Nearly every song on Epic follows the same pop formula, with anthemic, layering vocals, autotune, and synth. It is not surprising that the album's producer, Rob Wells, has worked with Justin Bieber, Selena Gomez, and the Backstreet Boys. "Save A Life" and "Mountains" are the only obligatorily slower songs. Perhaps as an attempt to sound cohesive, the album opens with a slightly unnecessary minute-long introduction. Similar interspersed light instrumentals can be found after "Good Times," an ode to the joys of growing up in the 1990's, and "Halo," but they do not seem to be filling a real purpose. By the end of the album, Epic seems like a batch of semi-cheesy party music tailored specifically for Christians, as shown through lyrics like "throw your hands up like a charismatic," and "I'll be speaking the truth through 80,000 watts."

For fans of the genre seeking a substitution to popular mainstream acts, Epic is produced just as well as any other secular pop release and will suffice. These are songs of hope, perseverance, and, above all, the joy of proclaiming what you believe. Fans of Manic Drive's earliest works will be disappointed, but for those interested in pop/dance songs with unabashed faith, Epic has you covered.