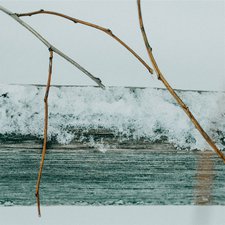 Weathered
Everything All at Once


Inhabiting the lighter side of Facedown Records, emo alt-rockers Weathered return with their second full-length, Everything All at Once. Describing this album as a "vast collection of stories," the Minneapolis four-piece presents an album full of cryptic-but-honest lyrics and grungy guitars in a worthy follow-up to their 2018 debut.

First off, I may state that Everything All at Once is an excellently constructed album. The album's longer, more wandering songs are spaced out well with shorter, energetic pieces, allowing the album to experiment a bit while keeping momentum. The most optimistic tracks are lumped towards the end, while the darkest moments inhabit the central tracks. Many of the construction moves are simple, but they're pulled off well enough to make a major difference in the enjoyability of the album.

With that said, the individual songs are more hit-and-miss. "Chasing Me" and "Safe Travels" both have weirdly poppy melodies for the dark lyrical content, but it doesn't feel like intentional irony so much as a strange melodic choice. In addition, the chorus lyrics, "I wish I knew all of this when I was young / instead of acting p*ssed off and getting drunk," from the former come off as an unfortunate blunder, which is especially disappointing considering the brilliant allusion to Job in the bridge. Fortunately, though, it gets far better. The regretful "Quick Tempered," the deliciously dark and groovy "Ghost Tape #10," the minimalism of "Final Form," and the faith-filled "I Will Not Go" all work together brilliantly to brighten the album.

All of which goes to say that, at the end of the day, Everything All at Once is an enjoyable and fairly memorable album. The construction atones for its most glaring faults, while allowing the best songs to fully shine through. It's a shame that some of the lyrics feel out of place or not fully thought through. Overall, though, Everything All at Once is a good alt-rock album well deserving of a listen.