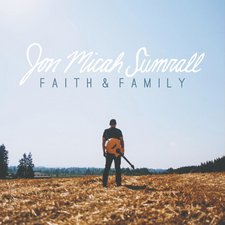 Once a moderately heavy band for their debut in 2002 (at least as far as Creed-ish bands go), Kutless went through a severe softening in sound over the next twelve years. Moving from Tooth & Nail to the sister label BEC Recordings, where rock bands go to become radio friendly, Kutless became nearly indistinguishable from their pop rock counterparts for their 2014 album, Glory. To take a step further, longtime lead vocalist Jon Micah Sumrall has written and recorded some songs, but this time, he's venturing out on his own. His solo debut, also with BEC Recordings, is up against some big names for its release date, but it turns out to be a fairly worthy adversary.

Sumrall's debut is called Faith & Family. Though I struggle to find a more generic album title than this, it actually makes sense, given that the album is about 50-50 when it comes to songs about Jesus and songs about his wife. I haven't found a reason for the way these songs were distributed throughout the album other than making the music flow as smoothly as possible from song to song. So no, the two types of song don't alternate. As such, when you listen for the first time, it can be a little weird, because you might be listening to a worship song and praising Jesus, and then a song about Sumrall's wife comes on next, and you don't really know what to do with yourself. Now, I'm one who believes that a sincere love song can be as God-honoring as a worship song (if done right), but the way it transitions so seemingly randomly on Faith & Family can be a little jarring. This is especially true given that the love songs seem to be a lot more based on actual personal experiences instead of universally-acceptable songs like his worship songs.

The worship songs themselves are fairly standard, and they're as radio-friendly as any of Kutless' worship albums, if not more so (along the lines of Glory). It's hard to get excited about the quality of the lyrics, but the songs are still encouraging and easy to sing along to once you learn them. "Psalm 56," for example, is a reminder of God's faithfulness to be our protector and give us life when we need it; "You are all I need, You are all I see, I will put my faith in You, when I am afraid, I will not back down, I will put my trust in You, my soul's alive in You," Sumrall sings. Similarly, in the following song, "King & Savior," he sings, "I come before You broken and alone, I wish I was worthy to kneel at Your throne, my sins are before You, what a wretch I can be, Lord I implore You, you have mercy on me." It's honest and heartfelt, for sure, just difficult to differentiate it from the other songs on Christian radio. The same can be said for the love songs. They're really sweet, and I find it to hard to believe that Sumrall's wife would've disliked any part of any of them. The hard thing about love songs, though, is that sometimes when you express your heart in such a way as this, it may not end up being the most artistic thing in the world. I've heard a lot of touching love songs that were sub par lyrically. When Sumrall uses lyrics like "The world is full of girls, but none as sweet as you, none that fit me like you do, I am thankful for the love you show to me, it's so nice to know you care," it can be difficult for some to really appreciate it.

Jon Micah Sumrall's choice to do a solo album is, honestly, a little surprising. Not that solo albums from lead singers of bands is an uncommon thing; I just, for one reason or another, never really imagined Sumrall doing one. I do appreciate the things he did differently to give it some flair, like using instruments such as cellos and lap steel guitars, and absolutely no electric guitars, which do help distinguish it from Kutless. Other than those exceptions, however, Faith & Family is a pretty by-the-book Christian contemporary pop album. It will go over very well with those who enjoyed Kutless' Glory or any fan of K-LOVE and Family Life Radio. Those who miss the harder edge of Kutless and those looking for more than just another album for the radio will want to pass on this.

Comprised of worship and love songs, Faith & Family brings a softer sound than what we are accustomed to from Jon Micah Sumrall. The Kutless influences are there, but Sumrall avoids direct similarities with the exclusion of anthemic drums and electric guitars. Instead, the songs feature acoustic guitars, piano, and lighter drums accented with lap steel, cello, and xylophone. What could have been a particularly intimate and creative experience is hindered by safe execution. Radio-ready songs like "King & Savior" and "Faith Hope Love" are decent, but deficient of the lyrical depth and robust hooks necessary for a lasting impression. Many songs contain encouraging words of romantic love and praise, but they are often too general for their straightforward delivery--especially "What I'm Trying To Say" and "Our Hearts." The last few songs--"Soul on Fire," "Marching On," and highlight "Live Like You"--improve the album's quality with more distinguished musical arrangements and honest songwriting. Faith & Family is a pleasing listen, but it lacks the components of a memorable record. - Review date: 2/15/15, Christopher Smith