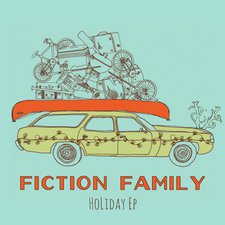 Musicians just never stop being musicians with each other, and Fiction Family is a prime example. A long-standing side project of Switchfoot's Jon Foreman and former Nickel Creek member Sean Watkins, the duo released a self-titled record in early 2009 filled with stripped-down folk and acoustic-styled samplings, much in contrast to the refined approach of the two's usual musical pursuits. But being a side-project, it was short diversion for the two before continuing with business as usual; but with a new full-length album promised for next January (aptly titled Fiction Family Reunion), fans of the project have much to look forward to. Until then, the NoiseTrade project Holiday EP fills in the gap.

To start with, the name of this EP seems like a misnomer. While there is one "Christmas song" presented here, Holiday EP is a hodgepodge-laden project with an additional four all-new cuts and a live recording to boot. As such, the EP isn't entirely cohesive, but that was never the project's intent; the six tracks contained therein all have their individual strengths. "I Don't Need No Santa Clause" is a Fiction Family original Christmas song to open the EP. The track captures a disgruntled man's discontent with the "stuff" of Christmas, saying that "all I want for Christmas is my baby here with me." While this description seems on the self-righteous side, the entire track is intentionally played merely for humor. With a background of quick acoustic guitar plucking, Jon Foreman's vocals nail the apathy-tinged mood for the track in expert fashion, resulting in a scaled-back Christmas ditty that fits Fiction Family's style exactly.

Next come "Up Against the Wall" and "Damaged," two tracks that will appear on Fiction Family Reunion early next year. The former is very reminiscent of Switchfoot's sorrowful "The Blues," recounting the injustice of everyday life ("the judges robes are stained, and the jury don't seem to care/our love is a puzzle that can't be solved"). Complete with horns and simple drum beats to set the tone appropriately, it's an effective song to give the listener a reality check to the world's fallenness, though it's worth mentioning that a mild, but still surprising, profanity mars the track's second verse ("right now it only hurts like hell"). Sean Watkins takes the lead on "Damaged," detailing the dilemma of hiding character flaws to save face with the simple statement of "I am damaged and I don't want you to know." While these two tracks aren't completely representative of the forthcoming Fiction Family Reunion's creative direction, having a bonus sneak peek really does add value to this project.

The remaining three tracks are odds and ends and not much more than that. A live recording of "We Ride" embellishes upon the original song's simple nature with an extended outro for added interest. "Don't Say You Love Me" and "My Forgetful Baby" are presumably b-sides from Fiction Family's next record; while neither track is particularly insightful or accomplished, they do serve as fun bonuses for the average Fiction Family fan. "Don't Say You Love Me" finds Watkins rejecting a former lover's advances, while on the other side of the spectrum, "My Forgetful Baby" is a laid-back bluegrass-esque number relaying a vignette of an easily distracted lover in pure tongue-in-cheek form. In the end, these songs are for pure fun's sake, and that's what Fiction Family embodies so well.

After a nearly four-year holiday, Fiction Family has given their fans a small sampling to hold them over until January. While Holiday EP isn't the most polished product as a whole, two major elements more than make up for it. For one, Fiction Family holds nothing back to make their first appearance since 2009, and these six tracks are quite a sufficient return to form; but secondly, the entire project is free at NoiseTrade (with tips accepted), so the value is unbeatable. Any potential drawbacks aside, it's a fitting prelude for Fiction Family Reunion early next year.