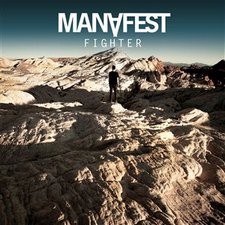 Rap rock isn't a genre many people are seeking out these days, but that clearly hasn't stopped Manafest. Fighter is the Canadian rapper's sixth full length album and the followup to his well-received 2010 release, The Chase. Fighter is a very polished album that showcases Manafest's status as a veteran in the genre, but it is also unfortunately very much on the safe side.

It's clear what to expect from Fighter as soon as the first track starts. "Come Alive" kicks off with lots of crunchy power chords, slow-paced rhythmic raps from Manafest, and a dramatic melodic chorus. It's a rap rock anthem if there ever was one, but it sounds like something we've all heard before. It's no coincidence that Trevor McNevan of Thousand Foot Krutch made several appearances on The Chase. In fact, if you've listened to much of TFK's discography, you've already heard a lot of what Fighter has to offer, at least in terms of the heavier tracks. Meanwhile, there are a few softer songs that are just begging to be played on CCM radio. The foremost of these is "Never Let You Go," which is found in both its normal recording and an acoustic version. It's a pleasing pop track with uplifting lyrics that compares well to some of FM Static's softer tracks. It's also a perfect example of the safe, radio-friendly sound exemplified throughout the album.

That's not to say Fighter isn't rather enjoyable. Manafest has polished his sound to a fine point, and there isn't a moment on the album that seems out of place or poorly written. There's plenty of encouragement to be found in the lyrics as well, and it's not hard to imagine listeners being encouraged by Manafest's can-do, God-focused attitude on display; just don't expect anything hugely creative or innovative. Even the heavy tracks never summon the energy and fervor that a great rap rock tune like tobyMac's "The Slam" demonstrates flawlessly. Fighter trades the chance to push the envelope musically for the accessibility of a generic radio-friendly rock sound. That's not necessarily a bad thing, it just means the album is less than it could have been.

If you like rap or hard rock, you will enjoy Fighter. It won't impress you, but it will serve as an encouraging listen for those times you just want to turn off your brain and listen to something loud. As noted before, rap rock as a whole isn't as well-represented in Christian music as it used to be, and this album is a decent example of what the genre still has to offer. All things considered, Fighter is a fun, upbeat rap rock album with a pleasantly encouraging message. Fans of Manafest and the genre in general will find plenty to like here.

Manafest has been on BEC Recordings for a surprising six years, but he didn't get a ton of attention until 2010's The Chase. The genre pretty much died in 2003 with Christian acts like .rod laver and KJ-52's Peace of Mind following suit, as well as Pillar moving towards a more straightforward hard rock sound by the time Manafest arrived. Building off of the success of songs like "No Plan B," "Avalanche," and radio smash-hit "Every Time You Run," Manafest returns with Fighter. The album is full of fun-to-listen-to tracks that are laced with encouragement. Although the album is a fun listen, it falls a little short of The Chase. "Fighter" brings energy similar to "No Plan B," and "Never Let Go" is the acoustic equivalent to "Every Time You Run," but the record has a more polished overall sound. The album also plays out as a much more radio friendly version of Manafest's previous work. The hardest rock song on the album is probably its best with "Prison Break." Manafest isn't afraid to continue releasing music in a genre that has been mostly dormant for nearly nine years and continues to polish his sound. Though Fighter is more radio-ready as a whole, it is sure to bring enjoyment and encouragement to his fans and anyone else who listens. - Michael Weaver, 4/13/12