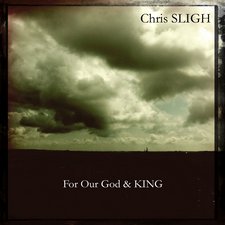 Chris Sligh
For Our God & King

If there were a television show that shook up the early 2000s, it would have to be American Idol. American Idol has launched some of today's biggest music stars, and while doing so, it has also revitalized the careers of several established musicians as well. Along with popular artists like Carrie Underwood and Kelly Clarkson, Idol is also responsible for bring recognition to artists like Mandsia, Danny Gokey, and season eight winner Kris Allen; all who have firmly planted their music and fan base primarily in CCM. Another notable artist to arise from the AI machine is season six finalist, Chris Sligh. Sligh has had a moderately successful career since his Idol days, with a handful of charting singles and four solo albums released to date. His most recent release, For Our God And King, was released on his website as a free download.

For Our God And King is a 14-track, straight-up worship album. Chris takes classic worship songs (such as "How Marvelous") and puts his own spin on them, without taking away from the original. The majority of the songs recorded on here are originals, and would find their place in Sunday morning worship with ease. Some of the highlights include "We Know (Pride Is The Enemy)," which is a catchy, upbeat tune where Chris expresses his concern about the pitfalls of pride. "You Meet Our Needs" also stands out on here with its Hillsong-inspired guitar parts and earnest lyrics. A personal favorite, "Communion Song" is a beautiful opus that starts off with just a piano and Chris's voice, but then the full band kicks into gear during the chorus. Chris also employs string instruments on several of his songs on For Our God And King, and they accentuate and add another layer to the different songs quite well.

Chris Sligh does everything by the book when it comes to this worship album. With his arrangements and heartfelt lyrics, he really does no wrong on here by general CCM-pop/worship music standards. But perhaps that's also his stumbling block; since everything has their i's dotted and their t's crossed on this record, it sounds no different than what bands like Hillsong or even the new Passion record sound like today. While his efforts and mission are noble, he lacks originality and intrigue on this album.

The main thing that would have made this album better is if Chris would have changed the game by adding some personal flair to these songs, instead of sounding like a clone of what's popular in Christian music right now. But nonetheless, For Our God And King is a solid effort with some standout tracks, and since the album is a free download, you really can't go wrong with getting it.