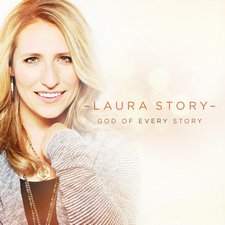 Laura Story
God of Every Story

Way back in 1996, Laura Story was the bass player for a somewhat obscure band called Silers Bald. In 2002, she released an independent solo album called Indescribable. A certain Chris Tomlin recorded the title track and it's still sung every week in churches across the country. But it's also known as a Tomlin song, not a Laura Story song.

Another independent album followed, and in 2006, Story signed with (then) INO Records and released a pair of albums featuring songs that would become radio juggernauts: "Mighty to Save" and "Blessings." The latter was number one for a stunning 28 weeks. Laura Story had a name of her own (and a handful of Dove Awards, an RIAA Gold record, and a Grammy).

Now, with the release of God of Every Story, the playing field has changed. People know Laura Story and her music, which has a pair of effects. First, people know what to expect when she sings. Her voice has a warm timbre, but she won't knock you over with powerful vocal gymnastics. Following her radio success, that voice is expected, so what it might lack in showmanship is overlooked, and fans listen more for the subtle emotions as in that near-whispered final line in "Blessings." Second, the new album brings a double challenge. Writers of worship music already fight a massive battle against sameness, creating music in a genre sadly defined by repetition and cliché. Artists with Story's success also battle their own catalog, and they need to bring something fresh to the table.

Story has an advantage. She writes songs of vertical worship, often scriptural, like so many, and she does it well. But she's also willing to infuse her own life experiences into her music, and her vulnerabilities season the songs with emotion and connect with listeners in ways that transcend cliché. God of Every Story explores the place of each human life in the context of God's redemptive story. This theme is particularly acute for Story, whose husband Martin was diagnosed with a brain tumor seven years ago. He is recovering but still struggles.

Story speaks more freely of this event than ever before on this album, most notably on the title track. While the play on words ("Story"/"Story") could come off as cheeky, the sobering history makes it appropriate. The closing verse, sung as if through tears, mentions the illness, the outcome, and another big life change, "Martin is thankful he's alive / The doctors said he might not survive / That was 7 years ago, what a miracle / Now there's this new baby girl / With one breath she's changed our whole world / Some say she looks like dad, but she looks like grace to me."

Lead single "I Can Just Be Me" is a case study in Laura Story's music. The song is not traditional vertical praise. The first word is "I," defining a person struggling to juggle life's challenges and fearing failure. The chorus is a prayer for surrender to God's lordship. With each iteration, the lyrics of the chorus change subtly, exploring the many roles of God in our lives. The song is perfectly suited for Christian radio. "Keeper of the Stars" (which was also originally the album's title) is like a second chapter to "Indescribable", reflecting the truth that trials produce perseverance that leads to hope for the future. "Indescribable" described a mighty, stellar God; "Keeper of the Stars" again proclaims His power and control, but it does so with a newfound testimony and trust that's been hard-won.

Ed Cash's production reveals expected attention to detail, to the point of distraction on a couple of songs. In several places, the piano sounds like the sustain pedal was pushed through the floor, muddying the mix. Vocals are excellent and emotive, and their aforementioned familiarity helps the songs connect to listeners. There are musical moments that are a little too predictable - swelling strings, marching drums - but there are also surprises. The bright staccato piano (thankfully missing the sustain) on closer "He Will Not Let Go" provides an undercurrent of hope not expected on such a slow, simple song.

Story's albums are now met with high expectations, and God of Every Story shows steady improvement in her already capable songwriting. There are songs that are fairly routine, both in lyrics and music, but Story maintains a particular ability to insert just the right phrase at just the right place to make a song transcend the routine.