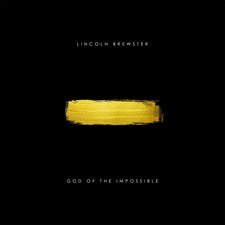 Lincoln Brewster
God of the Impossible


Amid a flooded market of worship bands and artists, Lincoln Brewster stands out thanks to his virtuoso guitar playing. A typical worship song suddenly catches the ear when a blazing solo flashes across an instrumental break. Brewster now returns four years after his last album to bring us God of the Impossible, a pop rock collection of songs focusing on the ways God works in a believer's life.

This sentiment is seen in the peppy opener, "Deep Down (Walk Through Fire)," as Brewster acknowledges God's work in His life and the resolve it gives him. The following two tracks express similar feelings and how they draw one to praise God. They also keep a strong energy coursing through their run time. "While I Wait" slows things down with a soft, piano driven prayer of commitment to God in difficult circumstances. This track is the album highlight as it deftly weighs a balance of despair and hope with lyrics like, "I live by faith/And not by sight/Sometimes miracles/Take time." "Loyal" resumes the upbeat pop with an emphasis on God's faithfulness. "Amazing God" and "Here I Am" are probably the friendliest for an average church band to cover and scale back the programming for a more traditional worship band setup. The rest of the album carries on as before and ends with the anthem "No One Like Our God," which proudly rests in God's power and neatly ties up the theme of His work in the life of the church. The deluxe edition features acoustic renditions of "Deep Down," "Loyal" and "While I Wait," all of which gain a new dimension in a stripped down setting. There is also "Relativity," an instrumental track that showcases Brewster and his band jamming out. These tracks make checking out the deluxe edition highly worthwhile.

What impresses about Brewster's guitar playing is the seamless way he blends face-melting solos with worshipful lyrics. They impress the listener, but they don't detract from the song; they are part of the worship experience. Personal experience tells me this is a tough feat to accomplish and worship writers can learn something from Brewster's style. Unfortunately, not even the most impressive solo can lift this album up from its weaknesses. God of the Impossible deals heavily with programming and pushes the live band to background status. Of course, Brewster's frantic guitar playing is present, but even that gets drowned out by the synth. Choosing to go with a more popular style may get Brewster on more radio stations, but it sacrifices some of the uniqueness he brings to the genre. The lyrics are also cliché and forgettable. If you're wondering why I passed over most of the second half of the album, it's because mere hours after listening to the tracks, I can't remember what the songs are about. There are some memorable tunes overall, but most fall into the forgettable camp.

I had high hopes when sitting down to review this album, but each listen leaves me wanting more. The deluxe edition shows something of how God of the Impossible could have been salvaged: strip down the flashy elements, focus on the heart behind the songs, and give Brewster room to flex his musical muscle. As it is, worship leaders may mine the album for a potential song or two for use in their churches. Sadly, the rest of the record will pass on like a dream.