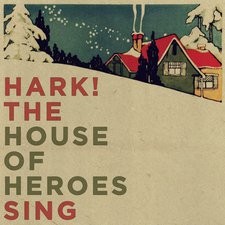 When recording a Christmas song, few bands have both the guts to think outside the box and the talent to retain the sacredness of the lyrics. Hark! The House of Heroes Sing proves that House of Heroes is one of those few bands. This is their second outing with Christmas music (third if you count the "Rebel Jesus" single), but this is a completely different animal than their 2009 EP. There is nothing here that is as upbeat as their stellar rendition of "All I Want For Christmas," nor as slow as the tender "Silent Night." Instead, these three songs rely on a steady yet experimental sound. Take the drums for example. According to the band, the drum loops you hear throughout the EP are from Colin Rigsby "beating on suitcases, acoustic guitars, bottles of Ibuprofen, CD jewel cases, and various other items laying around the studio." It is outstanding how they can take such an unconventional approach to crafting music and make it sound fresh.

The first song is a medley of the Christmas carols "God Rest Ye Merry Gentlemen" and "Joy To The World." The first half of the song takes a simple musical approach, while the second half is appropriately more triumphant. The two carols are perfectly threaded by a thumping kick drum and a clever use of the word "joy." The gentle "O Holy Night" is carried by an intricately played acoustic guitar and a rattling drum loop (bottle of Ibuprofen?), which gives way to a soft electronic vibe in the chorus. Tim Skipper does not stretch his voice as you would traditionally hear with "O Holy Night." Rather, the song relies on somber and reverent vocals accompanied by beautiful harmonies.

The third and final track, "Christmas Morning," is the first original Christmas song from the band. It tells the story of a man away from home who is excited to be with his significant other on Christmas Day. He compares the feeling of being home to the joy of a kid on Christmas morning. The soft acoustic guitar, fuzzy keyboard, and organic drum loop add to the nostalgia of the song.

Originally promised as a stretch goal for funding their upcoming concept album, Hark! is a short but stirring Christmas EP. The only real complaint is the length, which clocks in at a mere eleven minutes. Anyone looking to expand their Christmas music collection cannot go wrong with picking this up.