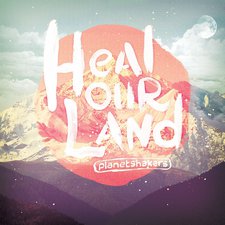 When you think about live worship artists from Australia, you undoubtedly go right to the Hillsong bands. But since 2000, Planetshakers have been doing just what Hillsong was doing, releasing live albums almost constantly. Up until about 5 years ago, Planetshakers was releasing albums independently; they signed to Word Australia in 2007, and then Integrity last year. 2012 is featuring their second Integrity Music album, Heal Our Land.

The very second that the opening track starts up, it's not hard to figure out how the rest of Heal Our Land is going to play out. I'm not saying to judge the book by its cover, but it's extremely rare to hear an opening like this one and then be blown away by the experimental (or even creative) nature of the rest of the album. It's got the driving guitars with the loud, Hawk Nelson-ish pop punk drums and easy, extremely singable lyrics designed to get the crowd pumped for the rest of the set. Now to be fair, I was a little surprised (pleasantly, that is) at the following song, "Good To Me," when it incorporated some 80s music into the mix (electronic sounds, kinda like the song "You Spin Me Round (Like A Record)" by Dead or Alive). While it's a nice touch, it's only one shining moment in an ultimately dull soundscape.

Of course, as we know from other albums in this "genre," the upbeat, rocking tracks are slim in number, with long balladry taking the reins for the majority of the ride. Half of the songs are more than six and a half minutes long and are down-tempo tracks, and even some of the shorter tracks (the shortest being a little over three minutes) are slow anthems. These are the songs that, for the people in attendance for this recording, provided the more intimate moments of worship. The lyrics of adoration, love and worship are repeated several times as the attendees and the band spend their time singing to Jesus. No doubt I would be lost in worship at times like this, as well.

Despite the worshipful nature of the music, it becomes very disheartening with bands like this to listen as a music fan and literally wonder which of the songs are covers and which are originals. It's often said that, with worship bands, the focus of the critic should be how worshipful it is. But this album is being sold to people, and I find something very wrong with charging people for worship music (maybe that's just me?). So it must be artistic if they want to justify charging people. Artistically speaking, if Heal Our Land was a painting, it would be like they took parts of other peoples' projects and repainted them onto their own canvas. Fans of Hillsong, Jesus Culture, and the like shall be pleased with Heal Our Land; music fans will not be.