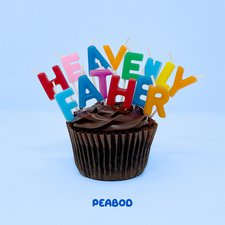 
Earlier last month, Centricity Music's happy-hip-hop artist PEABOD began telling a new story, taking listeners on a very personal journey overcoming a struggle with bitterness that launched with his first new single, "Big Feelings." It was a darker track than fans were accustomed to from PEABOD (and you can read my full review of that song here), but Isaac Peabody never seems to wallows in angst or leave the listener without hope. His new single, the more gospel-flavored "Heavenly Father," picks up where "Big Feelings" left off, and finds the artist rightly reaching heavenward for answers.

The song starts out with a childlike voice calling out "Heavenly Father" set to some soulful "oo's" before PEABOD comes in, immediately opening his heart to the listener: "This is not the way I thought I would grow / stuck inside a mood from two weeks ago / People acting colder than winter / Got me feeling jaded, thinner / Tried to block it out but it's in my brain and now I get anxious when I pray / Technically I'm older and bigger, but I feel too young to be this bitter." He continues to wrestle with the conflict inside and prayerfully adds, "God, Your ways are higher than my highs and my lows / Elevate my thoughts to those better than my own." It's definitely a relatable struggle that many more believers most likely go through than feel comfortable admitting, so there's something therapeutic about hearing PEABOD being so vulnerable, while never accepting the darkness he's battling.

For the chorus, Gotee Records' Cochren & Co. joins Isaac, soulfully singing, "Heavenly Father, won't You show me where you are, cuz I feel too close to this / Heavenly Father, won't you hold me in Your arms, cuz I'm in the thick of it." PEABOD has consistently enlisted the help of talent that seems to perfectly complement his voice and style, and Cochren's contribution only continues this trend.

I could virtually quote the entire track here, highlighting lines that stand out, but I want to leave more of it to be experienced while you listen. "Heavenly Father" is catchy, prayerful, transparent, inspirational and encouraging -- it's the kind of song that I can connect with on a personal level, and reminds me of why I fell in love with Christian music as a 90's teen in the first place. So far, we're two tracks deep into PEABOD's next set of songs, all said to be centered around a specific theme. So far, it's a solid effort that definitely leaves me looking forward to more. Check out both of these songs and be on the look out for his next single, "Wonderful & Scary," which is currently slated for a late September release.