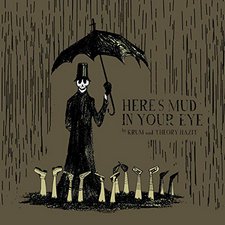 
In early 2017, Dallas rapper Krum released Blue-Eyed Devil, his first studio album after his 2016 name change. One track from the album that quickly became a fan favorite was "Tokyo Market," which featured a guest verse from the one and only Theory Hazit. Thankfully, this team-up didn't stop there, as the two have been working on new music together for the past couple of years now. With Krum on raps and Theory on the beats, Five 7even Collective presents Here's Mud In Your Eye.

If you've been following the duo on social media this year, then you've already gotten a taste of these new tracks - whether through their weekly Muddy Monday series or the exclusive-to-cassette, for-fans-only b-sides collection, SPAT. But whether you've sampled these tracks or not, you already know you're in for something special. Krum and Theory have each been making hip hop for more than twenty years, and it shows in both the high quality output and the style. Theory's beats and production are amazing here as he utilizes a classic, sample-based production. It occasionally reminds me of some of the production stylings of Dust (most well-known for Mars ILL and Deepspace 5), particularly in the closing track, "Why Eye." But most of Here's Mud In Your Eye is uniquely Theory, with tracks like "Tell Everyone," "Live from the Alley Way," "Dead Fish Only Float Downstream," and "Joose" standing out. But although those tracks are stand-outs, it's pretty difficult to listen to the album and find a bad track.

Theory drops in a ton of audio clips of people from various media saying the album's title (and similar types of things), but Here's Mud In Your Eye is actually inspired by a story in John 9 where Jesus heals a blind man's eyes by spitting in some dirt, making mud out of it, and anointing the man's eyes. When he washed the mud off of his eyes, he had been healed of his blindness. The album is also full of clips from sermons talking about the subject, touching on not only God's willingness to heal our brokenness, but the trials He helps us endure as we get to the healing. Much of Krum's lyricism here is centered around these ideas. As usual, he brings his A game on the mic, spitting clearly and fluidly with excellent wordplay and his signature cadence while sticking to the topic at hand. Of course, some songs (like "Quiet Game") are just fire tracks for hip hop fans, but most of the album goes deep into Krum's trials and temptations (much like what we got on Blue-Eyed Devil).

One of the highlight tracks - and an unbelievably relatable one in the digital age - is "Man vs Machine." Krum tackles the burden of digital addiction, which leaves you empty but can still come all too easily when your entire career almost requires you to stay constantly connected ("I know that I'm supposed to do a list of what they told me to, algorithms won't bring me close to You, I will gladly watch the brand fall apart, if that means it brings me close to Your heart"). "Come Through the Fire" is an extremely vulnerable track. He gets personal about family issues (like his sister's near-tragic pregnancy), some of the mass shootings as of late, and the feeling of helplessness when presented with these types of situations. But the end of this track also displays the hope found in Christ that Krum is always ready to point to, even when being open about his struggles. It features a clip of a preacher during a church service saying, "Have you been tried in the fire? Well, tell me: did you come through as pure gold?" It's a wonderful reminder that, through all of the hardships believers in Christ will inevitably go through in life, the Lord will always bring them through.

Paragraphs and paragraphs could be spent diving into the lyrics, so it's ultimately just best to leave it up to you to spend a considerable amount of time on this album. Not many days have gone by since its release that I haven't listened to it, and I don't see this changing anytime soon. Here's Mud In Your Eye is beyond a shadow of a doubt one of the best pieces of work in both Krum's and Theory Hazit's lengthy discographies. If you were lucky enough to cop one of the USB cassettes, you know how in-depth and generous this offering is, with all of the bonus content you can't get anywhere else (if they ever do another batch - or the vinyl pressing they're thinking about - do not miss it). But even if you're only option is buying digitally or streaming, you're going to get one of the best albums of 2019.