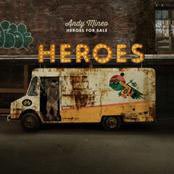 Introduced to the world thanks to his performance on Lecrae's hit single "Background," Reach Record's newest star Andy Mineo, after teasing us with his mixtape Formerly Known in 2011, is finally coming out with his highly-anticipated label debut, Heroes For Sale. Opening with a haunting sample of the hymn "Come Ye Sinners Poor And Needy," Mineo immediately sets out to establish his own unique sound. He experiments with such a wide and eclectic variety of styles from reggae to R&B to metal that one would think it couldn't gel; the lead single, "AYO!" displays a New York-inspired techno-rock sound; "Still Bleeding" features a classical symphonic sound; "Caught Dreaming," featuring for KING and COUNTRY, displays an alt-pop melody and vocal stylings; and "Wild Things" is almost a straight-up heavy metal song, complete with screaming.

But Mineo proves his musical intelligence by making this stylistic diversity work, as not one of the genres that he experiments with feels mishandled. But as solid as the production itself is, Mineo's crisp, high-pitched raps deliver as well with transparent, witty, and at times confrontational lyrics thematically centered around making sinful humans your heroes. At various times, he lays bare snippets of his testimony and personal struggles, ranging from regrettable past decisions ("Curious") to lust ("Shallow") to his relationship with his estranged father ("Bitter"). He also deals topics ranging from societal issues like human depravity ("Superhuman") and his relationships with non-Christians ("Wild Things") to the 116 Clique anthems "The Saints," with KB and Trip Lee, and "Uno Uno Seis" with Lecrae. The album finishes with a heavy-hitting trifecta of songs where he seems to turn up the dial on his passion, dealing with the harmful power of words in "Still Bleeding," the struggle to give up his "other gods" in "Tug-of-War," and the climactic brokenness-themed "Death Has Died."

There isn't one dull song or misfire in the entire 65 minute runtime of Heroes For Sale, proving that all the hype around the album was not unwarranted. That said, many might be thrown off by Mineo's transparency and bluntness (I think he could have used some more poeticism at times) and the overall darkness of the album. In addition, the heavy content leaves little room to breathe, making one think it would have been better if the album were shorter as to not get overwhelming. I also cannot say that much of the album's content, both lyrically and music-wise, is anything vastly different from what many are noticing to be the "Reach Records formula" (ei, God is good, people are sinful, the world is messed up, we need God), but Mineo's album is so vastly unique in other aspects that it is hardly a knock against it. In any event, Mineo's debut album is definitely a great start to the year for Reach Records, and it is a must-have for any Christian Hip Hop fan.

After Andy Mineo collaborated with the likes of Lecrae, Trip Lee, and The Ambassador over the past two years, I was quickly anticipating a solo joint and here we are: Heroes For Sale. The album's lead single is "AYO!" which flows seamlessly with hot beats, great rapping, and exactly what you're looking for when seeking some nice hip hop. Andy definitely brings solid production and good spitting on this song and through most of the entire listen. Examples of this are "Cocky," with banging beats and raps of "some say it's cocky, I just know that God's got me" and "Death Has Died," on the more meaningful side with "One day He'll wipe every tear from our eyes." Some of the songs are straight up rap, but there's a good chunk of the R&B style for those who prefer the more chill side of hip hop. Overall, there are more good tracks than less than stellar songs, but tracks that may disappoint are "Curious," " Ex Nihilo," and "You Will," each falling into the filler and flawed category. These tracks can be repetitive at times, contain rather simplistic depth, and leave the listener wanting just a little more. They're not overtly bad, however, they're just not as good as the rest of the record. Some of the best rapping I have heard in a long time is found in the latter part of the album. "Uno Uno Seis" features Lecrae and uniquely brings a Latin infusion to the idea of Romans 1:16, while "Take Me Alive" and "Tug Of War" are just banging. Lastly, "The Saints" is an amazing take on the classic hymn containing rapid-fire rapping and creative beats, making for a superb joint. All in all, any fan of the rap/hip hop world will want to pick up and will enjoy it thoroughly, despite the handful of minor missteps. Heroes For Sale definitely demands attention in the early part of the year. - Kevin Hoskins, 4/4/13