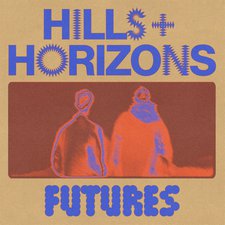 
Futures is a pop/CCM group now a short four years removed from the release of their debut single, "Inspirations," a song that hit #1 on the iTunes Australian Inspirational Charts (bet you didn't know there was such a chart). Relocating to the Atlanta area from Australia, the members released a live full-length worship album, Just the Cross, through their relationship with Influencers Church, and then followed that with the 2020 EP, Reborn, a studio recording of many of the best songs from their debut. It is good worship music, but that's not a genre that is lacking these days, and when DREAM Records signed the group to their growing roster in 2020, a style change became necessary.

Hills + Horizons, the first Futures release on DREAM leaves no doubt that this is decisively more pop and less traditional worship with the opening moments of "Just So Good," with a swirling wave of electronic texture and heavy-reverb vocals. It's a great song with a catchy, simple chorus and a great melodic hook. Like the standard pop formula dictates, the song clocks in at exactly three minutes; in fact, seven of the album's eleven tracks are almost precisely three minutes long and only the closer "Good News" breaks three and a half. That's quite a contrast from their previous worship releases (and most modern worship) with average song lengths pushing five minutes.

Hills + Horizons is light on traditional instrumentation, mainly focused on a huge backbeat, frequently minimalist electronic percussion other than the deep bass, and layers upon layers of synthesizer and vocal echo and processing. When guitars are featured in the mix ("Alibi" and "Famous" begin with jazzy electric hooks; "Remedy" and "Good Things" mix in more mellow acoustic sounds), it is a pleasant addition, though they are usually quickly buried in the synths and the stacked vocal mix. If a song doesn't completely land for you, the short length means you'll get to the next one quickly; unfortunately, that means that songs like "Famous" (my favorite track) that clearly have a lot of potential to build and ascend to something grander ultimately end up wrapped in the abbreviated pop-single mould. The ending of "Dandelion," the strongest part of the track, could easily be a bridge to a longer song if the pop formula wasn't being so carefully adhered to.

Throughout the album, songs trade off between male and female vocal leads, providing a good bit of variety, and the short song length means every song gets right to the vocals without much musical breathing room. While the vocalists are clearly all talented (this was evident from previous releases), the heavy vocal processing on some songs is distracting and does not always allow for much personality to be displayed, and the autotune tricks on "Can't Steal This Love" are completely unnecessary. The best moments, even despite the group's shift toward the pop direction, are the most worshipful: "Famous," "Remedy," and the title track (which is also the lead single) are great examples of pop instincts, stellar production, and worship sensibility intersecting in just the right place.

Hills + Horizons is a remarkably high-gloss pop album with a huge sound, bearing very little resemblance to the more congregational worship style of Futures' previous releases. As member Chloe Evans described in the group's recent interview with JFH, it is a "fun and fresh" sound, simple in its lyrical sentiments of praise and worship, very uncomplicated and often CCM-like in its songwriting, but frequently infectious and should be very appealing to fans of this type of electronic pop music. Not every song lands as successfully, but each is compact and straightforward and almost every song has enough hooks to work as a single. Pure pop music is too easily written off by many music fans who tend to reject music that is "over-produced"; although I had a similar initial reaction, this album stuck in my head and grabbed me more after multiple listens, and fans of this type of pop/worship combo have a great way to kick off their music listening for 2022.