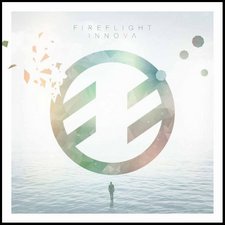 
Never ones to shy away from specific and difficult topics, perhaps no Christian band has ever been so consistently dedicated to spreading a message of encouragement in a mature way than Fireflight. Also, perhaps no Christian band has maintained their sound (a polished, melodic hard rock sound with soaring and impassioned vocals) more consistently through four albums while keeping each release relatively fresh and enjoyable. Only The Healing of Harms stands out as being distinctly more raw and edgy than the rest of their catalogue, and even then only to a small degree.

It is perhaps for this reason that INNOVA will throw most listeners for a loop; Fireflight has opted for a significant overhaul of their well-established sound, creating something that sits somewhere between industrial rock and pop/rock with heavy electronic elements. The shift in styles is perhaps even more drastic than the likes of RED's Release The Panic and Icon For Hire's self-titled sophomore album (or, for the folks who remember classic Skillet, their 1998 sophomore effort Hey, You, I Love Your Soul). Now, on one end of the spectrum, this is a rather courageous and admirable thing to do; to experiment with new sounds and new styles. But on the other hand, when the overhaul is as drastic as this, there is a great risk that the fans won't buy the shift (a la, the aforementioned RED album), or that there is a significant downgrade in overall quality.

That said, I do need to hand this to Dawn Michele and co; on the technical side, the band handles the style shift very well. If the band is at all uncomfortable with this new direction, they don't usually show it. Production quality is as polished and thorough as ever, and the band's lyrical stance is as clear as it has ever been. Where Fireflight can (and likely will) lose some people is that INNOVA seems like an effort to follow popular trends in an increasingly dubstep-influenced pop music scene (strong beats and tons of distorted bass). Of course, that in itself is not necessarily bad, but it is strange for me to think that INNOVA sounds like a heavier edition of the Newsboys' Restart, knowing how vastly different from each other those two bands both used to sound.

Lyrically, though, INNOVA screams "Fireflight," as evidenced by the uber-encouraging leadoff track "Keep Fighting," for those going through tough times ("Oh, no, we're never gonna let it go / We'll keep fighting Nothing's gonna bring us down / Nothing's gonna take us out / Nothing's gonna stop us now"). "Lightning" follows in a similar vein towards those who feel put down ("You're gonna light it up / With your electric love / You'll make them feel afraid / Because you're dangerous / They'll never understand / Cause you're a mystery / They can't contain your energy"). Similar messages of hope and encouragement flow through the pores of each song with the possible exceptions of "The Fallout" ("This is the fallout / This is the breakdown / What are you fighting for?") and "Out Of My Head," which both have themes of internal wresting. However, no song has any real explicit spiritual message ("Easy To Break" and "Light Inside" come the closest, but unfortunately, those are two of the album's least memorable tracks). Certainly, nothing is explicitly contradictory to the Gospel message, but for a Christian band who encourages those with issues of self-doubt, discouragement, frustration, hopelessness, etc, on the scale of Fireflight, the fact that they aren't more spiritually specific than "Shine where you are / You are my star /  There is a light inside of you" when they profess the incomparable Savior of the world is mildly concerning (for the record, I absolutely have no doubt in the faith of the band members, and perhaps some more obvious spiritual themes are escaping my notice; I just find it odd that the don't specifically address the world's biggest, most meaningful encouragement on a record meant to encourage).

All in all, INNOVA packages a familiar message inside a new soundtrack, and does it proficiently, but not necessarily memorably. It will divide old fans and win over some new ones, but I hesitate to say that any potential target group will adore this record. I also refuse to consider using the word "bad" to describe any aspect of this album; I will use "safe," I will use "trendy," I will unfortunately use "unmemorable," but I will not use "bad." I will be interested to see how fans react to INNOVA, but I will be even more interested in the band's reaction to their fans reaction (after all, RED put out arguably their strongest, most admirable work after their biggest misfire).

Like so many beloved rock bands, Fireflight has decided to try something new all on their own. After a successful PledgeMusic campaign comes INNOVA, a bold new step for the band in both sound and scope.

As could be expected, Fireflight still feels like the band its fans have come to appreciate, (though without founding member and guitarist Justin Cox this time), but at the same time, INNOVA feels like the beginning of something brand new, and it's a refreshing approach overall. The heavy electronic influence all over the album is really what sets the album apart from the band's prior work, and in that sense, it's also the very factor that could prove divisive among the band's fans. There are times where the electronic and heavy elements mesh together well ("Keep Fighting," "I've Got the Power," and the standout duet with Anberlin's Stephen Christian "Safety"), but other times it tones things down just a tad too much ("Here and Now," "The Fallout," "Easy to Break"). It's very much a case-by-case basis on the tracklisting as far as how heavy Fireflight chooses to go, opting between poppier material and the harder rock upon which Fireflight has built their name.

All of that being said, INNOVA might not appeal to all Fireflight fans, but these bold stylistic choices present here are respectable, even if they don't always succeed on every cut. Like so many independent artists, however, Fireflight is at their fullest potential when they're performing the music they earnestly want to make, and that makes INNOVA a winner. - Review date: 5/4/15, written by Roger Gelwicks of Jesusfreakhideout.com

Fireflight has long been a staple of female-fronted Christian rock, but that label may have changed with the release of INNOVA. The group seemingly deviated from their signature sound on 2012's Now by adding a significant supply of electronic elements, which many fans hoped was just an experimental phase. However, INNOVA has proved otherwise. Nearly all rock aspects (as well as the stunning ballads) have been abandoned, leaving nothing more than a somewhat stereotypical synth-driven pop rock album. A lot of weak tracks show up, but are counterweighted by decently good songs, such as "The Fallout," "Out of My Head," and "Light Inside." The best piece on the album is "Safety," which features Anberlin's Stephen Christian, where the dual vocals add a lot of texture to the song. In the end, Fireflight was a great rock band, and is only 'okay' as an electronic band. INNOVA will certainly be a polarizing project, and may or (hopefully) may not reflect a permanent shift in the band's genre. - 3/12/15, David Craft of Jesusfreakhideout.com