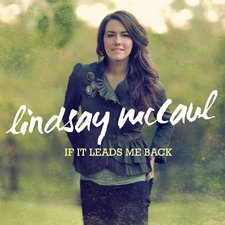 Lindsay McCaul
If It Leads Me Back

It's a good time to be a woman in music, perhaps for the first time in years. Not so long ago, industry watchers and music fans were commenting on the lack of female presence in CCM, but, though Christian music's most popular acts are still quite male-led, it doesn't take more than a glance at recent signings, new releases, and music news to notice the next generation of ladies stepping into the field.

Among those new faces is Lindsay McCaul, a songwriter who brings something refreshing with her debut If It Leads Me Back. Last year, her single "Say My Name" and follow-up EP, as well as touring with Casting Crowns and Sanctus Real, made the introductions and provided a preview of her new work in progress. Though her "day job" is on the worship team at Harvest Bible Chapel in Chicago, her personal musical efforts don't necessarily fall into the expected genre. Her inviting style and introspective yet vertical writing lead the way into a different sort of worship album.

The best way to describe McCaul's sound is thoughtful, songwriterly acoustic pop, though even that label might be contradictory. It's acoustic, but not folky; accessible, but not too poppy; vertically focused, but not worship in the usual sense. Most noticeable from the start is her unassuming voice. The current trends for women in music tend toward huge, powerful vocals, but McCaul's soothing, restrained alto matches her down-to-earth musical personality. The result is something friendly to the radio listener, but unique enough to win over this music fan.

The album opens with a quiet piano and soft drums, and the echoing refrain of her first single "Say My Name." As the gentle ballad builds layers of drums, piano, and airy guitars behind her singing, it sets the tone and style. For the most part, quiet and thoughtful is the norm, though "Face to Face" and "You Never Change" bring a little upbeat flavor. The former has a fun pop energy with almost a classic Cindy Morgan vibe; the second takes a summery, cheerful acoustic guitar direction that fits right alongside her contemporary Jamie Grace. Another highlight is "Where Do You Go," which brings in some spacious drums and gives a touch of atmosphere to the latter tracks. The piano-led "If It Leads Me Back" ends everything on a beautiful, prayerful note and stands out for its earnest simplicity.

The music isn't the star as much as the words. McCaul's heart is in her writing, and in 11 tracks she beautifully lays out her vision and reflections. Longing and returning weave a common thread throughout the record, with many of her songs drawing inspiration from people in the Bible. But rather than detach their stories into abstract concepts, she blends them into her own observations and experiences. The opening lines of "Say My Name" for example, recall the image of Lot's wife looking back at the burning city of her past "Tried to turn my head around / For too long just to see it now / That I can't erase any mistake." "Take My Hand" compares her own struggles with fear and faith to Peter walking on water; "If It Leads Me Back" begs, Job-like, "Don't let all my pain and weeping be in vain" even as she declares "You are all that I have left." The lyrics may sound somber, but they are tempered by great hope and gentle wisdom, and together tell a story that anyone who has traveled the way of faith can relate to.

Lindsay McCaul's debut doesn't blaze new trails or dazzle with flashy production or mindblowing vocals, but it does show off what she does best, giving a home to her personal songwriting and offering a refreshing and lovely new release to the CCM scene. Her honest lyricism, warm voice, and relaxed style blend into an inviting debut worth getting to know this winter.