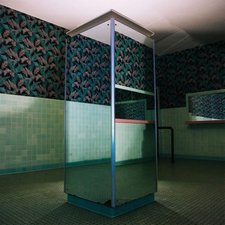 Everything in Slow Motion
Influence


What do you want out of a rock album? There's no correct answer to this question, and there's a massive breadth of potential responses. There are fans who want their rock raw, unfiltered, with untuned vocals and untriggered drums; others want perfectly quantized, pristine sounds with nary a flaw in sight; others still might not know exactly how to tell the difference. Sometimes we want contradictory traits, like punk-rock simplicity as well as virtuosic instrumentation, or lovely melodies as well as non-stop screaming. This conversation could continue into preferences for certain sub-genres, vibes, types of singers, and so on, but a few albums have been released this century that help me qualify exactly what I'm looking for: albums like Thrice's Major/Minor, Falling Up's self-titled, Wolves at the Gate's Types & Shadows, or Forever Changed's The Need to Feel Alive. And as of October 2020, I have a new contender for that shortlist: Everything in Slow Motion's Influence.

Influence finds the perfect balance between alternative rock and post-hardcore, akin to Hands Like Houses, Off Road Minivan, Wolves at the Gate, or My Epic, whose lead vocalist Aaron Stone features prominently on the title track. The album is not without its screams and breakdowns (see: "Penny Wish"), but it's a considerably less heavy, less metal affair than EISM's breakthrough Phoenix or lead vocalist Shane Ochsner's previous band, Hands. Similarities could easily be drawn to the streamlined guitar rock of Forever Changed or the atmospheric stylings of late-career Falling Up, but what's most striking about the collection is how rarely it tries to impress. My Epic's Violence is perhaps the most apt comparison, as another album that often pulled its punches, avoiding drum solos or speedy guitar riffs in favor of massive power chords that create a heavy ambience and make way for emotionally-charged progressions. (It was also My Epic's guitarist, Nate Washburn, that produced this album.)

With seven years separating Influence from Phoenix (and only one EP released in the meantime), this comeback needed to be firing on all cylinders in order to capture the power of that debut album, which was widely praised back in 2013. But Ochsner and co. sidestep expectations, focusing this set on passionate, catchy melodies, with a bedrock of music that pairs with the dour lyrics in synergistic fashion. Not all the lyrics read very well on paper, but even at their weakest, they match with and blend into the music profoundly well, like the way a great actor can do incredible work in bringing to life a subpar script. Ochsner's words are undoubtedly dark, often suggesting being caught in the midst of spiritual warfare, with few (if any) glimpses of the hope of the gospel, but his sentiments ring earnest. Perhaps the theme can best be summarized by the bitter pleading heard on "Satellite": "Is this love or hope? Just help me understand." But the oft-depressing lyrics don't result in a downer listening experience -- to the contrary, the songs are always exciting, often energetic, and sometimes downright beautiful (especially the 90's-tinged duet "Something I Can Feel").

Influence is, in one word, effective. Each song displays Ochsner's mastery as a melodic composer and as a vocalist, with a clean-to-dirty, soft-to-scream range that has no weak spots. I've never fallen in love with one of his projects before the way that I have Influence, which checks all of my boxes for what makes a great rock album -- which I can't really say about any other Christian rock releases I've heard this year. Now, if you need to find me, I'll be at a local coffee shop, air-drumming to these ten stellar songs and failing to get the choruses of "Clementine" and "Taking Turns" out of my head.