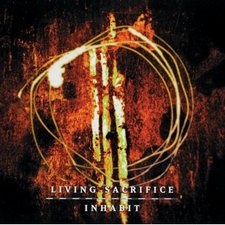 The legendary Christian metal band Living Sacrifice's Inhabit was released in 1994 on R.E.X. Records and, since then, has become a cult classic in the realm of hardcore metal. Years have passed and much has changed since their self-titled debut. Moving away from the thrash metal era, the guitar tracks on this release were much heavier, the drums were faster, and Darrell Johnson gave up his Metallica-influenced voice for a growling death metal vocal delivery. After being out of print for more than five years, Living Sacrifice was able to re-release their early material on Solid State Records in 1999 and Inhabit re-emerged from the ashes.

Lyrically, nothing has changed. When compared to their self-titled debut, the structures of the lyrics are the same, making up one long verse without a chorus or a bridge. What makes each Living Sacrifice album so great is the band's boldness to proclaim the name of Christ through music. Some of the words from the title track can easily be viewed as lyrics from old hymns, "Praise the Lord God Almighty, Worthy is the Lamb who was slain, Inhabit our praise O' Lord, Encircle us with Your presence."

The only problem with Inhabit is that Darrell's screaming vocals will become irritating to anyone who is not a fan of death metal. His screaming, growling voice will definitely have fans of their early material saying, "This is Living Sacrifice? Is that really D.J.'s voice? What happened here?" Luckily, the album is not comprised of screaming vocals throughout each song. There are a few breaks here and there, which include heavier guitar solos and breakdowns provided by Bruce Fitzhugh and Jason Truby. As mentioned earlier, Lance's drumming abilities are very fast and he really adds a lot to each song.

Despite the transition in vocal delivery, Living Sacrifice has put together another good album that has stood the test of time. The CD booklet for the Solid State Records release includes liner notes from drummer Lance Garvin, which adds a little information about the recording process the band went through in the Fall of 1993. Overall, there is nothing different or original about Inhabit, but the album will differently please fans of Living Sacrifice and hardcore metal. Please know that this album is very heavy and very raw, so if you have a sore tooth when it comes to hardcore metal, it would be best to stay away from Inhabit.