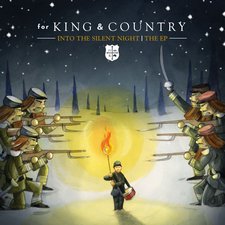 for King & Country
Into The Silent Night | The EP

In October 2012, eight months after the release of their debut album Crave, for King & Country released the Christmas single, "Baby Boy." Since then, the Aussie brothers, Luke and Joel, have maintained a rigorous touring scheduled and released a solid live album. Now, their Christmas single from 2012 is on a brand new Christmas EP, entitled Into the Silent Night. "Baby Boy" is accompanied by another original song in the title track, two covers of Christmas classics, and a live version of "Baby Boy" itself. While there are only four different songs on this five track outing, it still manages to pack a punch and delight as expected from this dynamic duo.

"Angels We Have Heard On High" opens the EP up nicely. While the early sounds are more subdued, the drums, guitars, and sleigh bells that enter in shortly really open things. The first "Gloria" is huge and the added bridge has that special for King & Country sound you're sure to love. The brothers do a solid job or reviving this mid-1800's hymn. "Baby Boy" follows and while it's not a new song it's still worth noting. It's a great tune about Christ's first coming and features superb harmonies. The guys keep it original with the romantic Christmas love song, "Into the Silent Night." The chorus is super catchy and will probably have you singing along with it to your significant other. The fourth is their take on a song that many artists try and fail, "The Little Drummer Boy." The recording starts with big and wide open drums and fades into bass and a simple driving guitar line similar to Survivor's "Eye of the Tiger," before opening back up with the drums. Not only do the brothers tackle a tough song, but they accomplish one of the more noteworthy versions since Jars of Clay hit it out of the park back in 1995. Finally, the EP closes out with a nicely recorded live version of "Baby Boy," from their recent live project Hope Is What We CRAVE | Live.

While it would have been nice to see Luke and Joel take on an entire Christmas album, this EP manages to impress quite a bit on its own. Big drums and sharp harmonies characterize much of the album, and certainly add to the enjoyment, giving it a familiar, yet somewhat different feel. Into the Silent Night has two solid originals and two well-crafted covers for your enjoyment. While the running time is only 18 minutes, and you do get stuck with one song twice, you should definitely make room for these tracks in your Christmas rotation or playlist this year because for King & Country have just released some new music for you to "crave."