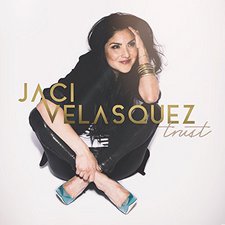 
It's been five years since Jaci Velasquez's last formal studio release, the genre-jumping but radio-friendly Diamond. Now Velasquez has returned with her latest offering, Trust. In a Facebook live video on her music page, Velasquez explained that Trust (Confío in Spanish) is her first full-fledged worship album, and it is also the first English/Spanish double album release in music history. Velasquez also explains that the theme of the album was particularly relevant to her current season in life, as she learns to trust God more with her life and the lives of her family members, particularly her older son, who has autism. Since this is Velasquez's first worship album, and it has personal significance to her, listeners may expect a powerhouse of an album. Trust, while powerful, has a different kind of power to it.

Trust begins on an intimate note with mid-tempo opener, "Trust You." It is one of the highlights on the album, with an explosive chorus and atmospheric synths played behind lyrics, "When there are storms, you make me stronger / When I am drowning, you walk on water / I know You're by my side / And I trust you." "I Will Call" continues with the subdued pacing, confirming this is not the pulse-raising and up-tempo worship album one might expect from a Jaci Velasquez album. One of the drawbacks of this record is that it only contains one fast song, the celebratory closer, "Sound of Your Kingdom." That's not to say there aren't highlights along the way. "God Who Moves the Mountains" features powerful lyrics about the nature of God ("He is not confined, He confounds / He is not resigned, He resounds") and a beautiful, raw electric guitar wailing in the background. "Great Are You Lord" features guest vocals from Velasquez's husband, Nic Gonzales of Salvador, and both husband and wife deliver passionate vocals and harmonize well together. One of the most unique tracks on the album, "Rest," is written in 6/8 timing (it's a waltz), which provides a nice change of pace. The track has a retro sound to it, featuring a clean electric guitar, an organ, and doo-wop "ooh's" in the background. Velasquez gives her most raw performance here, as she practically yells "You are my shelter!" during the bridge. "Praise the King" is a joyful reminder of the resurrection of our Savior, and Velasquez's children join in towards the end of the song, adding a nice congregational vibe. "Sound of Your Kingdom" is ushered in with a groovy bassline and funky guitars, ending the album on a high note, albeit somewhat abruptly.

As Jaci Velasquez's first full-length worship album, Trust accomplishes what it sets out to do--honor and glorify God. It's not the most engaging album, and far from being the most energetic, but those who are looking to spend some personal time worshipping the Lord and reflecting on His attributes can Trust that this album will be of great help to them.