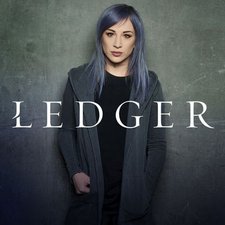 
The first time I saw Jen Ledger perform was in 2008. She was playing one of her first shows with Skillet during their Comatose tour, and the band was making a pretty big deal of her presence. Immediately impressed by her skills as a drummer and vocalist, I thought to myself "she's gonna do a solo project." Now almost exactly a decade later, Ledger announced that she's dropping her first release, simply titled Ledger. Fans of Skillet will indeed enjoy this release, as will any fans of pop rock with an electronic twist (think Fireflight, circa 2013). Ledger is easily accessible, and even retains strong crossover potential.

The six-track album opens with "I'm Not Dead Yet," which also serves as the EP's first single. Its heavy-hitting rhythm, gripping melody, and soaring vocals pair perfectly with the anthemic lyrics: "I'm not dead yet, so watch me burn / go on trying, lying, you're so sure / I may be broken, but I'm not done / I'll go on fighting while there's breath in my lungs." This is easily the strongest offering on the album, but that's not suggesting the album goes downhill from here. The second track, "Warrior," features vocalist John Cooper of Skillet. His appearance is far from a surprise (indeed, it was almost to be expected), but his added vocals create a nice variation and texture on the EP, thankfully before listeners would require such a shift.

"BOLD" is an acceptable track, but it feels too familiar as a whole and fails to make a memorable impact. Thankfully, "Foreigner" picks up the slack with sharp lyrics and the curiously tasteful inclusion of folkloric songs. While the verses and bridge hash out some more poignant and deep intricacies, the chorus brings it all together with a more simplistic declaration: "I am a foreigner / got a fire in my soul, never give it up / and I know I don't belong right here." "Ruins" is a lovely ballad, and one of the album's best songs. It does a fantastic job of showcasing Jen's vocal and songwriting talent. "Iconic," however, fails to make a mark as an album closer. It mostly serves as a rehash of Ledger's earlier tracks, and while it contains a few highlights, it feels better suited for a full-length LP.

After my first listen-through of the review copy, I made a mental note that nearly every track on this EP sounds like an end credits song from the "latest popular theatrical release." In some ways, this is a good thing. It also is representative of some of the album's flaws. Most of the album is quite good and no one thing on it is "bad," but it consistently struggles to maintain its above average status. The (over)production floats between being heavy-handed and even overbearing at times, failing to properly service the album. Again, this reality doesn't significantly detract from the music, but it does seem to prevent the tracks from breathing on their own.

Ultimately, Ledger is a fun release. After spending several years lying in wait, Jen Ledger is proving that she is more than capable of producing quite the gem. If future projects are allowed a more nuanced approach, we could very well be listening to one of tomorrow's great pop rock artists.

Jen Leddger is bringing back edgy pop/rock with her anthemic and personal debut EP. This eponymous and mononymous solo project showcases Ledger's versatility as a vocalist--soaring choruses were a given, but just listen to the almost haunting vocals in the verses of "Foreigner." It's not necessarily a standout release of 2018, but it's a solid offering that sets a nice platform for Ledger to launch a solo career. - 4/20/18, Christopher Smith