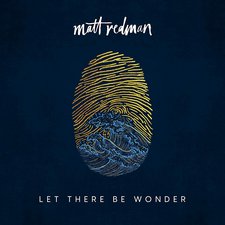 
Matt Redman has been a popular name in the worship scene for quite a while, and with each release, its clear that his material is always a step ahead of the others. With impressive records such as We Shall Not Be Shaken, and Glory Song under his belt, he has solidified his place in the industry as a worship artist with a knack for crafting excellent praise songs. With his latest release, Let There Be Wonder (Live), some of the same elements are present from those albums; but, unfortunately, Redman fails to create something as special as some of his previous works.

Kicking things off is the vibrant and passionate The Same Jesus, which is a wonderful praise song that should easily be added into many church's rotations. With lyrics such as Theres a Jesus, who carried our shame / Theres a Jesus, that rose from the grave / The same Jesus we worship today, its a memorable and catchy worship anthem. We Praise You follows in the same vein, and is a solid addition to the record with its buoyant guitar hook. All Praise (Sing Praise) and Upon Him are also enjoyable songs, and serve as decent numbers. The title track shows a reverent Redman at his best: Let this place be an upper room where your people learn to wait / Let this house become holy ground, where your children watch and pray. Another highlight is the piano-driven Merciful Father, which is a beautiful piece of work as Redman passionately sings of Gods incredible saving grace.

Despite these strong points, this record isnt without its flaws, with some being bigger than others. A glaring issue towards the backend of the album is the redundancy, which sounds a lot more like listening to Jesus Culture, rather than Matt Redman. The string of Jesus Your Name, In The Name and Hymn Of Surrender fall flat compared to some of the other songs on the project. Of course, worship isnt the most original-sounding genre around. That being said, Redman has always had a way of writing above-average material, but he falls short here in this area. Refreshing anthems like Gracefully Broken just arent present here, and in their place are lackluster fillers such as King Jesus. Another downfall is the length of certain tracks; some would have benefitted from cutting out the repetitiveness, while bringing more lyrical substance to the table. Also, the included radio version of The Same Jesus seems completely unnecessary, as the album would have had a more powerful ending if it closed on the previous track, A Ti Adoramos (We Praise You)."

This isnt to say that Let There Be Wonder (Live) is all bad, or that this endeavor is a failure. There are some wonderful moments, especially in songs like the aforementioned The Same Jesus, and the title track. However, from an artistic standpoint, Redman doesnt charter any new waters at all; instead, he backslides into a more cliche and overused formula. The inspiration and passion that we are used to hearing in his work is generally lacking here, which is a shame. From this particular reviewers perspective, Let There Be Wonder (Live) isnt quite as potent as what it could have been. With that being said, for fans of the current worship scene, or fans of Redman, this record is definitely well worth giving a listen.