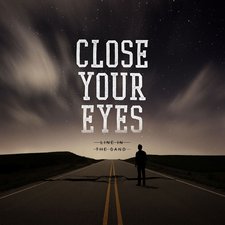 Close Your Eyes
Line in the Sand

2012 was a tumultuous year for the band Close Your Eyes. Founder and lead singer Shane Raymond left the band, drummer Tom Friesen left after only a two-year stint, and rhythm guitarist Andrew Rodriguez returned after a year away. To top things off, Raymond's replacement, Mikey Sawyer, was removed from office by the band after only a couple of months on tour. While the Texas group was seemingly in disarray and headed for what some may have thought to be an imminent break-up, something special happened. Sam Ryder Robinson, of Blessed By a Broken Heart, joined the crew. It seems Robinson's influence from across the pond is exactly what the band needed to get them on track. Raymond and Robinson have a similar vocal style and the change isn't extreme at all. The main difference is Robinson's obvious British accent; Robinson may actually even have a better singing voice. Their third album, Line in the Sand is truly something special.

CYE have been classified by some as punk, by others as hardcore, and by some others by the sub-genre melodic hardcore. Line in the Sand is all of those things and more. The punk sections are edgier, the hardcore sections are more -- well, hardcore -- and the melodic elements are stronger than ever. Songs like "Sleeping Giant," "The End" and "Skeletons" are hardcore; selections like "Days of Youth," "Kings of John Payne" and "My Way Home" are undeniably punk; while others like "Frame and Glass" and "Trends and Phases" are more melodic rock in nature. The album is all over the place musically, but manages to have a sense of cohesion that other artists, not as experimental, can't achieve. Not one song sounds alike, but they aren't randomly thrown together either. It's doubtful that anyone could have guessed Sam Ryder Robinson would have had quite this effect by joining. Robinson also keeps with the band's past as the songs all remain positive and hopeful in message.

One song of particular note is "Glory." Christian fans may be taken back a little by the opening line, "Hallelujah, glory to man. How great and holy are we? Hallelujah, humanity who harness the sky and harness the sea." Never fear. This song of seeming self-praise eventually shows listeners true humanity and gives "glory" where it needs to be. After reflecting on humanity's shortcomings the lyrics change to, "Look upon this kingdom of man. How weak and fickle are we? Look upon this kingdom of man who poison the sky and defile the sea." Finally, Sam brings the point home as the lyrics change yet again to, "Hallelujah, glory to God. How great and holy is He? Hallelujah, oh Son of Man, who created the sky and divided the sea," to close the song out. It's one of the album's best tracks and stands out with others such as "Line in the Sand," "Frame and Glass," "Kings of John Payne" and "My Way Home." Possibly the strangest thing about this record is that even though CYE are known for their hardcore elements, and they pull them off nicely here, the best sections are the more melodic ones. Without the intro track "Deus Ex Machina" and the outro track "Follow the Sun," this just may be considered a perfect album. They are interesting tracks, and though the transitions are extremely smooth, they don't really add much to the final product either. "Burdened By Hope" would have been an awesome punch in the face to start the album on its own without an intro and "My Way Home" fades out with a soft acoustic guitar that serves as a textbook ending. One could argue the opening and final tracks actually take away from the overall dynamic.

Close Your Eyes have released the perfect album for themselves at this point in their career with Line in the Sand. The bar has also been set extremely high for future efforts. Any doubters to the band's validity or how they would survive 2012 have officially been proven wrong. All of the change and turmoil of last year has not affected their progress and they continue to grow and improve as a band. A lead singer change is often the death of a band, if not in whole at least their musical identity. However, CYE manage to avoid that pitfall. This London-fronted, Abilene, Texas group have released a near flawless album that is extremely hard to poke holes into. It holds true to everything you expect from CYE, but also expands and improves on that same sound. Fans of hardcore, punk, or any melodic rock should pick this album up quickly. Close Your Eyes is set to impress in 2013.