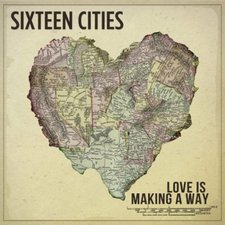 
The fourth release from the Pacific Northwest-based Sixteen Cities, Love Is Making A Way, following the 2010 self-titled full-length effort and a pair of EPs, starts off promisingly. "Sound of Love" is a textbook-perfect pop/rock number, blessed with a catchy melody, high-spirited vocals and just enough of a rough rock-based edge to gain (or, in this case retain) street cred amongst those who fondly remember the first Sanctus Real record.

From there, though, the results are distinctly hit and miss. "All Around the World" follows in the impressive footsteps laid out by the opening cut. The sweeping pop sensibility and indelible sing-along melody of "Still Here with Me" combine to create a track that would have surely sounded great on early '70s AM radio - which, despite what the naysayers might claim, is no small feat. And the closing worship-number-meets-power-ballad, "Consume Me" (not to be confused with the dc Talk song of the same name), manages to be both meditative and stirring at the same time.

Just about everywhere else, though, the band tends to fall back on the generic, largely tuneless worship-oriented fare that goes great guns on Christian radio, but tends to frustrate those who remember just how energetic and catchy the music they heard over the airwaves used to be before songs like "I Can Only Imagine" hit the collective consciousness and, seemingly overnight, forever changed the rules for making Christian pop.

Ironically enough, it is the most ostensibly commercial material that may well end up being the group's undoing, as these sort of cuts seem very likely to get swept up, and away, in the flood of like-sounding artists all vying for those twenty spots at the top of the Inspirational pop charts. The good news, though, is that tracks like "Sound of Love" and "Still Here with Me," in particular, provide clear and heartening evidence that, should the band decide to turn off their radios and follow the admittedly riskier path less traveled, a truly superb album might just lie in the making.