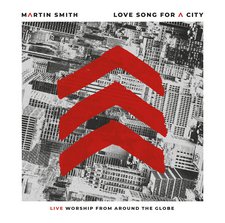 
After Delirious?, one of the most influential worship bands of their time, disbanded in 2009, frontman Martin Smith released a string of EPs that eventually resulted in the full-length album, Back to the Start in 2014. Things were quiet on the worship front for the next 4 years, although he did form the rock band Army of Bones and released a strong self-titled debut. Now, Smith is returning to his worship roots and bringing a live album with him. Love Song for a City follows in the recent trend of live worship albums, though Smith mixes in old and new songs with references to his Delirious? and Army of Bones work. He also recorded the album over the course of two years in eleven countries, giving the album a more epic feel than its compatriots.

The title for this album originates as an Army of Bones tune and was a highlight off that record. In a head-scratching move, the song here is relegated to hyping up the crowd with a dramatic bridge and chorus at the beginning and throwing in a hook at the end of "Song of Solomon." It works effectively in both instances, but it's curious that, given its title track status, the song doesn't get more than that. The recording is rounded out with another Army of Bones track, "Ecclesiastes." The song carries a different feel in a more worship-centered context, but is also effective. The lone Delirious? appearance is the chorus of "Majesty" as a coda to "Waiting Here for You."

The new songs introduced here are "Come Holy Spirit," "Leap of Faith," "I Will Sing," "Jesus Only You" and the instrumental "Veni, Sancte Spiritus." "Come Holy Spirit" is a slow burn and acts as a proper opening with its quiet beginning that grows in intensity, like an earnest prayer that grows in boldness. "Leap of Faith" is a fun, catchy track that stands out thanks to a spoken word segment by Holly Roe, which is powerful if not a little long. The spoken word outro doesn't land quite as well and comes off a little cheesy as Roe shouts, This is/the leap/of/FAITH!" "I Will Sing," though not as memorable musically, stands out for its vulnerable and honest lyrics such as, "I will sing through the silence/I will sing when I'm alone/I will praise Your name forever/For my heart will be Your home". The borderline cliché lyrics of "Jesus Only You" are saved by a quiet chorus in Spanish and the instrumental interlude that follows is nothing jaw-dropping in and of itself, but works to add atmosphere to the moment.

The older songs mesh well with the newer ones and all are laid out in such a way where, if you have a free hour, you can worship along with audiences from around the globe and feel like you're in each crowd. Smith brings all his skill to bear and it greatly enhances the listening experience. He is energetic when the moment is fast-paced and celebratory, then he is soft-spoken when the song is slower and reverent. The backing band and singers all get moments to shine and you can feel how they feed off each other. In a lesser artist's hands, the lyrics to most of these songs could come off as over-used phrases or cheesy lines, but Smith brings a certain charm to the proceedings. Maybe it's the British rock flair, maybe it's his years of experience. Regardless, fans of Delirious? or Martin Smith's other solo work will enjoy this record, while newcomers may find a fresh favorite worship artist.