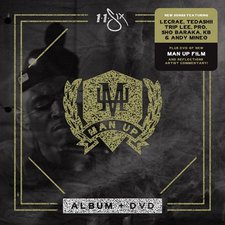 Reach Life Ministries and Reach Records have realized a serious issue with today's men: they do not know how to be a true God-fearing man. While the campaign is designed with a heavy leaning toward the urban culture, this issue has been plaguing all of America for years--whether it's deadbeat dads, abusive husbands, or a "man" who lets drug abuse or alcoholism run his life and ruin his family.

The entire campaign consists of a conference, curriculum, a short film, and a soundtrack all geared towards challenging men to "Man Up." For the purposes of this review, we will be focusing on the soundtrack only. This is the most accessible part of the campaign and the physical copy comes with a DVD of the short film.

Lecrae, Trip Lee, Tedashii, Sho Baraka, KB, and PRo (better known as the 116 Clique) have come together with a little help from Andy Mineo to release the Man Up soundtrack. The soundtrack is seven hard-hitting tracks that challenge men in different ways. "Man Up Anthem" is the theme for the entire campaign. The track is a battle cry that explains what a real man is and labels those who aren't real men of God, "...basically little boys with muscles and a mustache." The group also goes on to place the blame for original sin squarely on Adam's shoulders saying, "Eve was deceived, but Adam is the one who let her eat." The track has a fantastic flow and really displays the talents of each individual; it's easily the best of the bunch.

"Authority" goes on to teach men to "Bow down to authority," both Godly and human, saying, "If you can't follow you can't never lead." "Responsibility" teaches a man to "be on the grind" of doing God's work and following his commandments. "Envy" warns men against coveting others and, instead, teaches them to be content with what you have. "Courage" teaches men to be courageous in their faith and their lives. The track would have been an excellent addition to the Courageous motion picture soundtrack. "Temptation" is another warning to men to "flee from it all 'til I'm free from it all." The song focuses on sexual temptation, lust and the dangers of giving into it. Finally, "Repentance" teaches that the first step to becoming a real man is to turn to Christ and repent from your sins.

Reach Ministries has done an excellent job of noticing a dire problem in our society and putting out a tangible product to fight it. While the Man Up campaign's soundtrack is only seven tracks, they are a powerful blueprint for men on living life as God intended. This is a perfect album for any struggling man who enjoys hip-hop. 116 are able to teach, encourage, and warn all at the same time, and they manage to do it with a great sound and top-notch production. You are going to want to pick this up.