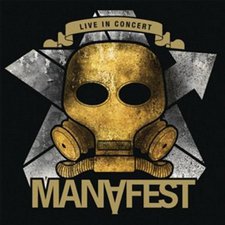 Manafest has been around the rap scene for a handful of years now, and BEC has released a live CD/DVD on his behalf. When it comes to live albums, they usually garner the attention of already known fans unless there is something extra special to grab the attention of new heads. So, how does Live In Concert measure up?

Mana has a slew of albums basically compiled of pretty solid rap tunes, so it's no suprise that the song selection here is full of good tracks. All listeners will enjoy the constant energy from the crowd amid a collection of great songs like "Avalanche," "Bounce," "Impossible," and "The Chase." Long time fans of Manafest, however, will notice that the bulk of this album is from last year's release and there's only a small selection from Citizens Activ" and Glory, a move that leaves out some great song choices. The bigger crime here, though, is that there is not a single song from Epiphany. I was definitely expecting "Rodeo" or "Skills" to be included in this compilation album, but they were both regretfully omitted. Also, I think that the overall recording could have gone without "Top of the World" and "Renegade" as there are much better options that could have used in their stead.

The addition of "Fear" - a spoken track - is a nice fit and a great message for today's youth. The bonus DVD material offers additional interviews, live footage of the show, and music videos, making for a pretty complete live album. Despite the omission of some great tracks, if you're a fan of Mana, you will not be disappointed in Live In Concert. If you've never given him a shot, this may be the time.