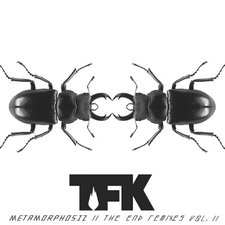 Releasing two free songs on NoiseTrade back in fall of 2012, Thousand Foot Krutch decided to give their tracks from The End Is Where We Begin a fresh sound. Following the success of the two free remixes, "Let The Sparks Fly" and "Light Up The Sky," the band announced that they would pursue a few remix EPs, with the first one released in December 2012 and the second half to be released in July 2013.

Both remix EPs feature artists and producers from all around the globe, each giving their unique spin on TFK recordings. On Metamorphosiz: The End Remixes, Vol. 2, the six tracks chosen for the remix are "Fly On The Wall," "The End Is Where We Begin," "Courtesy Call," "Down," "Be Somebody" and "So Far Gone," with remixes done by a collective group of talented individuals, including Solomon Olds, formerly of Family Force 5, who also remixed "Light Up The Sky" for the NoiseTrade remixes.

Opening up the EP is "Fly On The Wall," as remixed by Robbie Bronnimann. On the original record, "Fly On The Wall" is string-heavy and has this eerie tension and buildup that lets loose in the chorus. It's definitely one of the oddballs on The End, and seems to get overlooked when compared to the other tracks. On The EP, most of the strings are gone, the tempo is sped up, and Trevor McNevan's voice has some light effects on it in the verses. Even with the changes, the essence of the song is still present, and stands up well on its own. Next up is the title track, "The End Is Where We Begin," and this was one of the first few singles released for The End when they were promoting it in Winter 2011. It's one of the mid-tempo tracks and isn't super instrument-heavy, looking to focus more on the vocals and lyrics. With the new version, remixed by Solomon Olds, it's definitely punchier, and is equipped with a few dubstep breakdowns after the choruses. While it's enjoyable, this one just doesn't resonate quite as well. And while danceable and a lot of fun, it's too broken up and inconsistent throughout the track. "Courtesy Call" is up to bat, and this track was also included in the singles released for The End. The track displayed the modern rock sound that TFK encompasses, and is a popular one for their live shows. "Courtesy Call" was remixed by Rui Da Silva, and starts with the interlude that played before the original recording. After the interlude, the strings are replaced with techno-infused beats, while Trevor sings the verses and chorus. The song ends with some of the original riffs and the Transformer-esque voice that does the intro and outro on The End. This track is different enough to stand alone, but still pays homage to the version TFK penned.

The second half starts off with "Down," one of the highlights of The End Is Where We Begin, and is one of the few tracks that show off McNevan's rapping skills, while maintaining the guttural rock elements. The remix was done by Andy Hunter, and doesn't have as much momentum as the track it's spawned from. This format complements the rapping, but seems to fall a little flat in the choruses. It's decent, but misses the mark in some areas, especially when comparing it to how great "Down" is without the remix. "Be Somebody" keeps things flowing by slowing things down a bit. Remixed by Robbie Bronnimann, this mellow track is fairly stripped down, with just a few pads and beats here and there, leaving room for Trevor's vocals to shine, much like the original, although there is a calming and intriguing synth part in the bridge. Given the nature of the song, there isn't a whole lot to be done with "Be Somebody," so it's left fairly vanilla. Rounding out the EP is "So Far Gone," a sweet and pensive track in the same vein as "Wish You Well" and "Breathe You In." Remixed by Joshua Silverberg (of Edison Glass fame), the song opens with a chipmunk voice and eventually transitions to Trevor's voice. Naturally, the acoustic guitars are gone, but what they're replaced by are fitting beats you can tap your foot to. With auditory treats to indulge in with every part of the song, it's a thoughtful way to sum up the remixes (although that chipmunk voice is a little odd).

Metamorphosiz: The End Remixes, Vol. 2 is a fun collection of tunes that highlight Thousand Foot Krutch's first independent release since their departure from Tooth and Nail Records. Like its predecessor, it's a mixed bag, but there are definitely more gems than lemons found here. Overall, it's a surprisingly good remix collection from one of Christian music's more prominent rock bands.