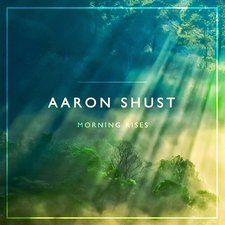 Two years ago, after a little over a half decade's worth of crafting catchy, acoustically-based folk-pop numbers, Aaron Shust understandably wanted to try his hand at something a little different. While he certainly succeeded in turning the desired stylistic corner on 2011's This Is What We Believe, suffice it to say that more than a few of his existing fans were put off by its comparatively glossier, custom-fit-for-airplay textures and relative dearth of the infectious hooks and melodies that helped etch simpler early folk and pop nuggets like "My Savior My God" and "Give It All Away" so indelibly within the long-term memory of just about everyone heard them more than once.

Those hoping that Believe was nothing more than a one-time blip on the proverbial radar screen will probably be less than elated with the latest effort, Morning Rises. Things do start out encouragingly enough with a short, but engaging, instrumental piece and the equally appealing "God of Brilliant Lights." These cuts are followed, though, by the largely lumbering "Cornerstone" and equally nondescript "Rushing Waters." "God Is for Us" does ratchet up the energy level somewhat, but like a sizeable portion of the remainder of the album, it comes fitted with the same mostly commonplace trappings that helped position the last release as yet one more similar-sounding project in the already overcrowded sea of radio-ready lite pop/worship artists.

On the lyrical side of the fence, Shust does fare a bit better than last time out. To be sure, even though entries such as "Brilliant Lights" ("Sing it out/ Shout it loud/ His love is like an ocean/ Forever overflowing") probably aren't destined to pull in any awards for originality, he does redeem himself with the yearning, unaffected "Satisfy" ("Fill us with your love/ Fill us with your Spirit/ Only you can satisfy"), whose words fashion the perfect adornment to its beautifully subtle instrumentation. In the same way, the resolute simplicity of "The One" ("For the One who holds tomorrow/ Holds me in his hand/ And I will not fear the future/ I trust the Great I Am") renders it just as attention-grabbing. Most tellingly, though, while the previous record at various points seemed like a mere collection of randomly-chosen snippets of Scripture tossed together into a sort of lyrical patchwork, Morning Rises comes across as a far more unified and coherent whole.

To Shust's credit, in spite of its frequent similarities to Believe, the latest outing, as a whole, does feature a slightly more pronounced (i.e. memorable) melodic quotient than the former effort. And fans of his earliest works will be thrilled by the stripped-down, folk-infused "Deliver Me," which harks back to, and arguably surpasses, anything found on the first two albums. Lamentably, though, that track is the only one of its kind on the new release which, although not nearly as solid or distinctive as the freshman and sophomore offerings, is certainly a step in the right direction after its largely undistinguished predecessor.